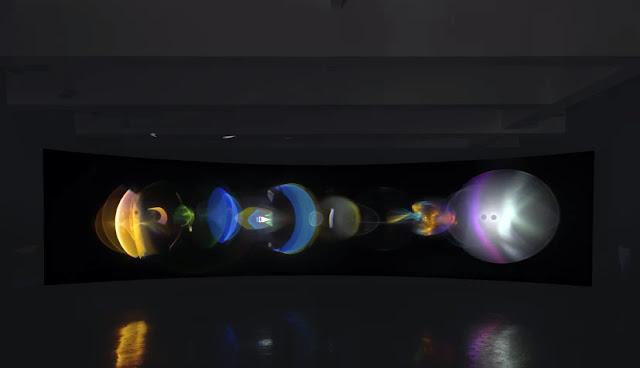 Tanya Bonakdar Gallery is pleased to announce Your ocular relief , Olafur Eliasson’s eleventh solo exhibition with the gallery, on view from March 9 through April 24, 2021, in New York. Since the early 1990s, Eliasson’s practice has concentrated around the investigation of perception, often using natural phenomena to heighten our understanding of each other and our surroundings. Your ocular relief continues Eliasson’s long-standing investigation of the cognitive and cultural conditions of perception, seeking to offer an alternative to the current pressures that shape our existence.

In the darkened space of the main gallery, Your ocular relief, 2021, the show’s eponymous artwork, unfurls before the viewer as an evocative light show of shapes, colors, and shadows. The ever-changing sequence develops and vanishes upon a large curved screen, behind which the viewer can glimpse the apparatuses responsible for it. An orchestra of lenses, prisms, mirrors, and color-effect filters slowly rotate within the beams of five spotlights. The light from the spotlights is broken apart and transformed through reflection and refraction into the sequences visible on the screen. As each apparatus revolves at a different pace, the relationship between the various sequences is constantly changing, always new. These lenses form at once the material for the exhibition and its conceptual inspiration. Most of the lenses featured here are from Eliasson’s own collection or are recycled from previous artworks and experiments that have taken place in the artist’s Berlin studio.

Eliasson has long been fascinated with optical devices and has collected all sorts of lenses over the years as part of his investigation into perception and the qualities of light. “We live in an age of the proliferation of lenses,” the artist says, “not only in the surveillance cameras that pepper our urban space, but also in the hands of activists who are aiming them back at the instruments of power. Through recent conversations with the art historian Gloria Sutton, among others, I have become intrigued by the notion of the ‘ocular,’ as we progress beyond the single-gaze of the panopticon to the decentralization of the authority of the lens. Today, many of us now carry lenses with us through our various devices, so the question arises—who is the owner of the narrative?”

In Your ocular relief, 2021, the lenses are divorced from their potential for use in observation and recording and are taken as material to create something of beauty, what the artist refers to as a radically analogue film, dependent upon the physical encounter between viewer and artwork in the here and now. The origin of the light can be seen, as can the objects that produce the images; cause and effect are directly on display. The lens flares at the center of the work are also stubbornly analogue. In films, a flare is an error or residue, a waste product. Resulting from the physics of the lens, it is generally undesired. Here it is transformed into the central element to be explored in all its possibilities. For the last decade, Eliasson has created glass works and watercolors inspired by the themes of color, transparency, and layering. He has long been fascinated by the visual ambiguity created by the ellipse, a shape that can appear either two-dimensional or as a circle viewed in perspective, depending on its context. For Mirror my calmness Buddha in me, 2021, colorful panes of silvered, hand-blown glass are arranged to suggest transparent, overlapping circles and ellipses. To him these are the simplest means for achieving a non-representational illusion of depth and movement in two dimensions, an alternative to the orthogonal conventions of Western perspective.

Colour experiment no. 106 , 2020, forms part of a series of circular paintings Eliasson began in 2009, inspired by the idea of producing a new, comprehensive color theory that would comprise all the visible colors of the prism. Eliasson began by working with a color chemist to mix in paint an exact tone for each nanometer of light in the spectrum, which ranges in frequency from approximately 390 to 700 nanometers. In this painting, a formless yellow, green, and purple explosion spreads out from the center of the canvas, contrasting starkly with the smooth, even background. These muted tones derive from the colors found in a photograph taken by the artist in 2012 in Iceland. Eliasson has traveled repeatedly over the last three decades to the country of his parents to document its unique landscape, lighting, and atmosphere. Located on both floors of the gallery, two artworks present rings of twelve glass spheres, which reveal complete rainbows made up of vivid colors. When Large chromosphere assembly, 2021, is viewed from the front, the entire work is permeated by bright colors. The concave reflective surfaces also produce an inverted image of the viewer and their surroundings within each sphere, a dynamic image that disappears when the ring is approached from an angle; viewed obliquely, the clarity of the glass re-emerges. Edgy but perfect kinship sphere , 2020, located in a darkened room in the upper gallery, is shaped by complex geometry; a product of decades of research undertaken at Studio Olafur Eliasson. The asymmetry of the polyhedron invites viewers to move around and examine it from all angles, stimulating their active engagement. The work’s surfaces combine panes of green-tinted glass and pink iridescent color-effect-filter glass, a special material that reflects light of a single color while allowing the remaining light (of the complementary color) to pass through. Light shines out from the center of the form to cast colorful shapes and shadows on the surrounding room. Under the upper gallery skylight, Model for decelerated light, 2021, picks up on Eliasson’s longstanding interest in navigational instruments, compasses, and models of our planet and solar system, such as orreries and armillary spheres. In this work, a large glass sphere, supported by a black tripod, is encircled by a brass ring with a strip of LEDs embedded in it. A small blue glass ball, mounted on a rotatable arm, can be made to orbit the globe by hand. “I hope that Your ocular relief offers a moment to exhale” states Eliasson. “In this past year—at a time when it felt as if there were no release, no relaxation—I became convinced that we need a moment of relief, of beauty, of letting go, in order to conceive of a better tomorrow. Before you have hope, you have to have relief.”

Danish-Icelandic artist Olafur Eliasson (b. 1967) works with sculpture, painting, photography, film, installation, and digital media. His art is driven by his interests in perception, movement, embodied experience, and feelings of self and community. Not limited to the confines of the museum and gallery, his practice engages the public through architectural projects, interventions in civic space, arts education, policy-making, and climate action. Eliasson is internationally renowned for his public installations that challenge the way we perceive and co-create our environments. In 2003, he made The weather project, a glowing indoor sun shrouded in mist at Tate Modern’s Turbine Hall in London. In 2008, Eliasson constructed four expansive artificial waterfalls along the Manhattan and Brooklyn shorelines for The New York City Waterfalls. He has also explored art’s potential to address climate change: for Ice Watch, he brought large blocks of free-floating glacial ice to the city centers of Copenhagen in 2014, Paris in 2015, and London in 2018. Passers-by could touch fragments of the Greenlandic glacial ice and witness its fragility as it disappeared before them. In 2019, Eliasson was named UNDP Goodwill Ambassador for climate action and the sustainable development goals. Located in Berlin, Studio Olafur Eliasson comprises a large team of craftsmen, architects, archivists, researchers, administrators, cooks, art historians, and specialized technicians.