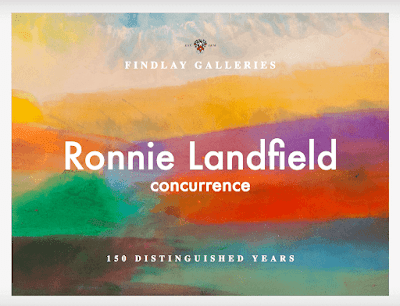 Ronnie Landfield was discovered in the mid-1960s by collector and architect Philip Johnson, who purchased many of his large works, donating some to important museums and keeping others for his private collection. Landfield exhibited at the Whitney Museum’s annual exhibitions in 1967 and 1969 and at the Whitney Biennial in 1973. By the early 1970s, Landfield became a pioneer of Lyrical Abstraction, exploring landscape as a subject, incorporating color with stain painting.  In 2007, the Butler Institute of American Art mounted a retrospective of his work.    “In Landfield’s work, land does become field – “field” here referencing visual scope more than natural terrain, although the conditions of nature clearly inflect his practice. In fact, the horizon at once separates and unites field and land, the space of sky overhead no less than topographic space underfoot. Landfield is practicing abstraction, of course, and is thus not bound in by the horizon line.” – Peter Frank, Art Critic (LA Weekly, SOHO Weekly, Huffington Post)  Landfield’s paintings are represented in public and private collections, including the Metropolitan Museum of Art, the Museum of Modern Art, the Whitney Museum of American Art, the Art Institute of Chicago, the National Gallery, the Seattle Museum of Art, the Norton Simon Museum, the Walker Art Center, the Federal Reserve Board, the U.S. State Department, Charles Schwab, Mobil, GE, ARCO, Prudential Insurance, Chase Manhattan, New York University, and Stanford University.

Celebrating 150 years in business, Findlay Galleries is an iconic family art business founded in 1870. Specializing in Impressionism, European Modernism, l'Ecole de Rouen, L'Ecole de Paris, and 20th Century American Art, the gallery represents over 100 artists and artist estates. Named Wally Findlay Galleries since 1965, the business was acquired in 1998 by James R. Borynack. A longtime Findlay executive, Borynack was committed to the relentless pursuit of veritable European period works and contemporary artists. In 2016 Borynack also acquired the David Findlay Jr. Gallery and merged the two. Since then, the gallery has operated under its original name from 1870, Findlay Galleries, and has continued to offer a strong collection of both period works and contemporary art, both European and American. Find out more HERE.