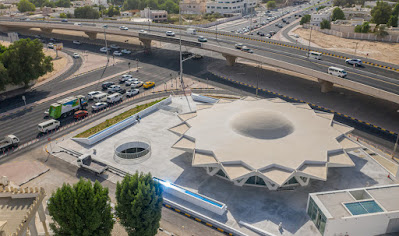 A historic panoramic, extraterrestrial -looking venue in Sharjah, United Arab Emirates, broadly known as the “Flying Saucer,” has been renovated and opened as a site-specific exhibitions art space by the Sharjah Art Foundation (SAF).

The SAF acquired the building in 2012, and for the 2015 Venice Biennale, stripped the saucer back down to its concrete. The newer renovations started by the SAF and the UAE-based Space Continuum Design Studio in 2018, the annex demolished and its administrative offices space consolidated underneath the building. A new concrete plaza, dubbed the “Platform” was added and will be used as a public gathering place and to stage outdoor exhibitions. Underground, a new venue called the “Launchpad”  holds a library, programmatic spaces, and offices, the “Green Crater,” a subterranean planted courtyard, and a multipurpose cafe positioned over said crater.

The concrete pavilion, originally opened in 1978 as an all-in-one style shop and restaurant in downtown Sharjah. A ring of V-shaped columns supports the outer edge of the building alongside full-height glazing, while an internal band of eight columns holds up the structure’s center. Two layers of alternating concrete petals make up the roof, centered around a 23-foot-tall concrete dome, lending the building its so-called flying saucer look. In later years, an incongruous annex was added to the Flying Saucer, its exterior columns were clad in reflective aluminum, and a drop ceiling and partitions were installed to divide up the interior space.

With the Flying Saucer itself restored to gallery status (the panoramic floor-to-ceiling windows let in plenty of natural light and provide views of the city from every position, now that the space has been emptied), it will now be used to stage an exhibition about the building itself.

Beginning on September 26, the multimedia show Nowhere Less Now3 [flying saucer] from artists Lindsay Seers and Keith Sargent utilizes “the architectural elements of The Flying Saucer to narrate an alien’s landing on Earth and subsequent attempts at understanding human patterns through geometry, gestures and movements,” according to a press release from the SAF. This installation is the third iteration of Nowhere Less Now. In the next few months, the SAF will put out materials for self-guided architectural tours so that visitors can learn about the heritage of the Flying Saucer and its subsequent transformations.