A second chance to visit “Alexander von Humboldt and the United States: Art, Nature and Culture” 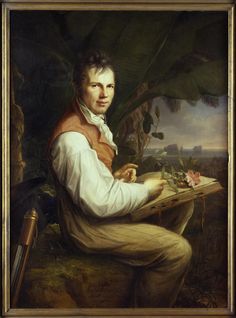 Alexander von Humboldt (1769–1859) was a renowned Prussian naturalist and explorer and one of the most influential figures of the 19th century. In 1804, after traveling five years in South America and Mexico, Humboldt spent six weeks in the United States. In these six weeks, Humboldt—through a series of lively exchanges of ideas about the arts, science, politics and exploration with influential figures such as President Thomas Jefferson and artist Charles Willson Peale—shaped American perceptions of nature and the way American cultural identity became grounded in the natural world. Humboldt’s concerns about issues such as climate change resonate to this day.

The exhibition centers on the fine arts as a lens through which to understand how deeply intertwined Humboldt’s ideas were with America’s emerging identity. It includes more than 100 paintings, sculptures, maps and artifacts as well as a video introduction to Humboldt and his connections to the Smithsonian through an array of current projects and initiatives. In a tremendous show of support, all lenders agreed to the extension.