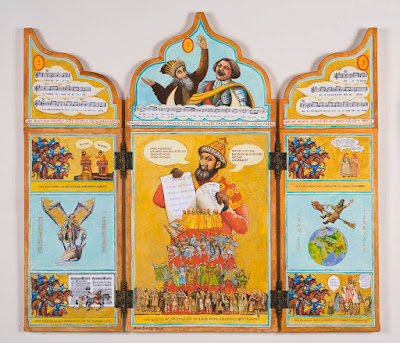 "Playground of the Autocrats" an exhibition by contemporary artist and historian Anne Bobroff-Hajal, draws from the visual languages of iconography and graphic art to create a large-scale visual commentary on Russian socio-political history. On view October 4, 2020–January 24, 2021 at the Museum of Russian Icons, Bobroff-Hajal's paintings form stunningly complex triptychs and polyptychs that represent a secular art tradition directly influenced by orthodox iconography, animation, political cartoons, graphic novels, and icons–all of which tell stories in pictures and words.

The detailed and whimsical visual stories symbolize the powerful human motivations of love, greed, grief, competition, and fury shaped by the geographic landscapes in which those humans live. Bobroff-Hajal has developed a complex process of repeatedly layering paint on digital images in her paintings and photographs. She uses the pleasures of art and humor to engage viewers with complex issues of Russian society's autocratic history from the fourteenth century through today, and its interface with the rest of the world. In each comical yet deadly-serious polyptych, she paints hundreds of 3-inch-high portraits of people—from slaves and serfs to autocrats—at moments of intense struggle to achieve their particular social system goals. Viewers of her art are accompanied across centuries by fanciful tour guides: self-delighted, arrogant flying Tsar "godparents" singing their advice to a swaddled, mustached infant Stalin in his cradle.

Artist Anne Bobroff-Hajal has drawn on animation techniques, icons, and formats such as graphic novels to tell stories of Russian geography and history from Ivan the Terrible to Catherine the Great, from Peter the Great to Stalin (and Putin). Satirical commentaries on how Russia's ruling elites have historically taken advantage of their unique geographic situation to amass and maintain power, she means for her art to honor and serve the dispossessed and forgotten.

Says Bobroff-Hajal of her work, "My extensively researched satirical polyptychs about Russia...revel in the crazy-quilt intersection of art with academic history and geography."

A resident of Westchester, NY, Bobroff-Hajal has a Ph.D. in Russian history and is the author of the scholarly volume Working Women in Russia Under the Hunger Tsars.  Her artwork has been widely exhibited and is held in private collections internationally.  Most recently, Columbia University's Harriman Institute for Russian, Eurasian, and East European Studies had a solo exhibit of her art about Russia titled "Peasants, Clans, and Effervescent Absolutists!"