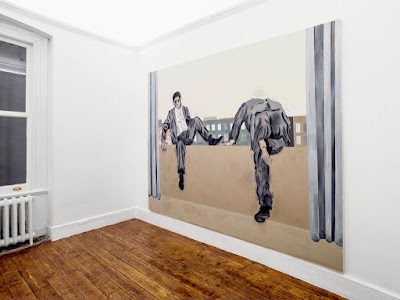 Rodeo Gallery (Piraeus, Greece) presents an Apostolos Georgiou's art show till September the 5th, titled "One by One".

In this new suite of works we are confronted with an abundance of situations that take place in Georgiou’s familiar undefined interiors. But for a change, some situations are set outdoors.

The nature of man unfolds in various works. Isolation, failure, and seeming irrationality are recurring conditions his subjects undergo. Never, though, are they unrealistic. The artist’s main material is human nature and its abyss.

As a writer of short stories, the artist composes large-scale paintings in which words have been replaced by rapid strokes; an extension of his body embodying the narratives his heroes undergo. A series of acts, some might even call them performances, take place: the story in the artist’s head, the one in the artist’s body as he applies the story to the canvas, the viewer confronting the painting. As the title of the show suggests, at a moment when the collective is challenged, we are being singularized as entities but also as viewers. There’s nothing as old as story-telling. But Georgiou’s no wandering troubadour. He hides underground, applying his anecdotes with acrylics on canvas. Too tragic to be comic. Too comic to be tragic.

Is the wandering figure wearing a dress the fool, or the wise man?

What do the goats think of the naked men devouring their food, and what kind of act is that?

Are we the voyeur or the party animal?

What are they saying when limbs are being unearthed along with antiquities?

Symbolism but yet not, metaphors but not really, neither reality; instead all of the above are valid and can be invoked in describing what is before us.

If there is a macho feminist type then this is what Georgiou is. If not, then this is what he is regardless. A man selling a fish to a woman; a naked lady with her back turned to the thinking industrialist; a couple en-gaged in bedroom activity while dreaming of others; a man squeezing the breast of a mermaid-posed lady on the beach, her pubic outline highlighted under her bikini; a reclining woman on the sand is receiving offers by three headless fellows; a woman picking black flowers in a grey horizon while a man is peeping underneath her skirt; three men puzzled and incapable of assembling a vertical triptych in horizon, that of a female nude; and a woman on her knees assisting a fully dressed man lying in bed.

Unsettling imagery in neutral backgrounds. The colours are dimmed and one recalls the artist once saying about the tonality of his palette that it owes its nature to the intensity of the natural light. An interesting remark about painting that is born in a basement, eyes trained under the extremity of sunshine.

This is the artist’s first exhibition in Athens since Documenta 14 (2017).

As we begun with the previous exhibition by Shahryar Nashat, Apostolos Georgiou’s solo show continues Rodeo’s new programme in which exhibitions are spread across both spaces in Piraeus and London. The London iteration of One by One will open in the following weeks. We will announce the opening date as soon as possible, as we closely follow the UK government’s guidelines

In an effort to keep the gallery safe and following guidelines, we are limiting the number of visitors at a time. The gallery is also open by appointment, please contact us to make arrangements.