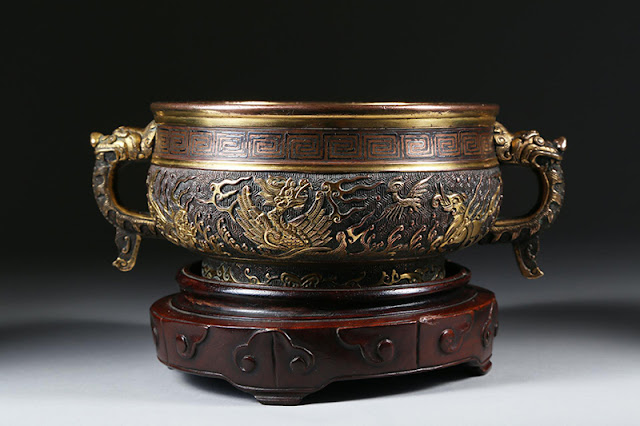 Lark Mason Associates will present two major Asian art sales: Chinese Export Porcelain and Works of Art from an American Collector– is now open for bidding on www.igavelauctions.com  and till April 21st,, with the second one– Asian, Ancient, Ethnographic Works of Art- commencing on April 2-23rd.

Some of the major highlights in Chinese Export Porcelain and Works of Art from an American Collector include a finely painted 18th Export Hong Kong Bowl (estimate: $15,000-25,000), illustrating the merchant houses of Canton, made in limited quantities for the western merchants active in Canton for the China Trade;  a fine gilded bronze vessel by Hu Wenming, a Chinese bronze artisan whose works created during the late Ming dynasty, featuring his signature imagery of mythical creatures in a band across the swelled body (Estimate: $3,000 to $5,000); and a selection of seven 18th century Himalayan gilt bronzes with a highlight  Hayagriva and Consort, with the group estimated to realize over $50,000.

With locations in New Braunfels, Texas and New York City, Lark Mason Associates, the eponymous, auction house specializing in Asian, ethnographic, and ancient works of art, was founded by Lark Mason after many years as an expert at Sotheby's New York.

Mason served as a General Appraiser from 1979 until 1985, and as a Senior Vice President and specialist in Chinese art with Sotheby's Chinese Works of Art Department from 1985-2003.  From 2000-2003 he concurrently was a Director of Online Auctions for Sothebys.com. He also served as a consulting curator at the Trammel and Margaret Crow Collection of Asian Art in Dallas, Texas from 2003-2009. He is a generalist in American and European works of art and paintings, as well as an expert in the field of Chinese art and has valued and advised many private collectors and institutions.

Lark Mason Associates regularly hosts auctions on the iGavel Auctions platform and has an established history of record sales of Chinese and other works of art and holds the record for the highest price achieved for any work of art in an online sale, for a painting sold in May 2014 that realized close to $4.2m. Mason, the owner and CEO of iGavel Auctions, is noted for his regular appearances on "The Antiques Road Show."