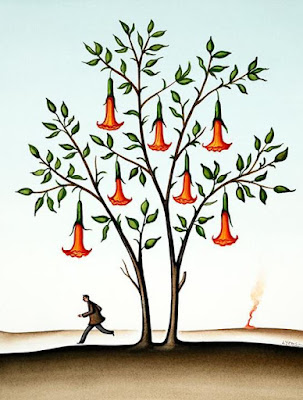 Dimitris Yeros is presenting 30 works executed in Greece and America over the last 27 years.  These are small and large aquarelles on paper characterised by a detailed realistic script. All the works are in colour since they come from earlier periods in his work,  unlike the monochrome works he exhibited in Athens three years ago, causing a stir with their subject matter. Most of the works in the exhibition feature his trademark little man that is partly an alter ego of the surrealist artist himself, incessantly moving between the real and the metaphysical and relating the problems faced by contemporary man in an enigmatic critical spirit and with an awakening consciousness.

At the same time the artist's ecological sensibility, in these as in his earlier works, remains strikingly prophetic. Hills, vast landscapes, birds, trees spermatozoa-like clouds, blots and volcanoes coexist in order to produce what surrealists call a "Divine Trick".

The well-known American art critic Dominique Nahas writes in the exhibition catalogue: Dimitris Yeros favors images that engage all of our senses. Such imagery, mediated by happenstance and reverie, is a poetic as well as a reconciling force. Through it the artist comes to terms with the world by using an imaginative project that expands into personal and universal dimensions. Within his vision the artist finds surprising poetic relationships between the subject and the content. In doing so the practice of art for Yeros is a means and an end for self-renewal through self-revelation. For the viewer the art of Dimitris Yeros could best be viewed as cultural gifts with long-lasting effects. Such art enriches this world by offering it a different, yet unique, vision of enchantment and contemplation.

The next exhibition of Dimitris Yeros is to take place at the Throckmorton Fine Arts of New York between early June and late September, where the famous artist will display the black-and-white photos he has shot on Lesbos in the last 35 years; it is to feature landscapes, scenes with people and nudes photographed at various spots around the island.


In November he is to exhibit the black-and-white photos he took in Egypt twenty years ago at the Tintera Gallery in Cairo, and in December he will exhibit new paintings at the Kapatais Gallery in Nicosia.

His poetry collection The Sparkling Bathtub was published by Kastaniotis in 1976 . He has published the photo albums Theory of the Nude, text by Peter Weiermair, (Planodion, 1998);  Periorasis, with texts by Michel Deon and Pierre Devin,   (Phyllo, 1999);  For a definition of the Nude, text by Peter  Weiermair (Phyllo, 2000);  Shades of Love, foreword by Edward Albee and introduction by John Wood (Insight Editions, San Francisco 2010  (listed in the ten best books of 2011 by the American Library Association);  Photographing Gabriel Gárcia Márquez (Kerber Photo Art, 2015), Another Narcissus with texts by Edward Albee and John Wood, (Phyllo, 2016). The books on his work are: D. Yeros, text by Yannis Patilis, (Forkys 1984); Dimitris Yeros, with texts by Peter Spielman, Heribert Becker and Ι. Rosenthal-Kamarinea, (Bochum Museum, 1986, on the occasion of his retrospective); D. Yeros, text by Chrysanthos Christou (Synecheia 1997); D. Yeros, text by John Wood, (Municipality of Hermoupolis 2001); D. Yeros – S. Karavouzis, text by Athena Schina, Kydonieos Foundation, Andros 2008.