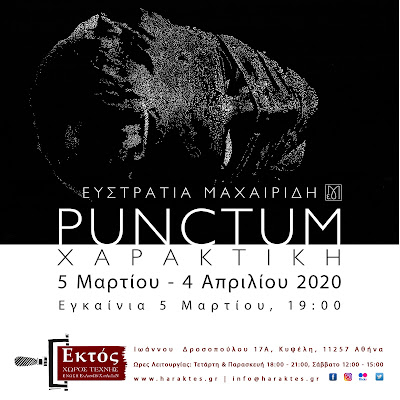 In Kypseli, at number 17A of I.Drosopoulou street (within walking distance of St George square), the Greek Printmakers association is launching the opening of a new art space under the name «Ektos».  The Greek Printmakers Association is a group of artists that is successfully active in the domain of Greek and international cultural events since 1987.  The space aspires to become a point of encounter, research and promotion of Contemporary Printmaking creation. The Greek Printmakers Association addresses a call to all people, to participate in its initiatives which involve exhibitions, workshops and presentations with epicentre the Art of Printmaking  The space launches its official opening on Thursday, March 5 at 19:00, with the solo exhibition of Efstratia Machairidi.

The artist states for her work: «Utilising as means of expression printmaking and the dynamics of personal expression, I pursue the provocation of thoughts; the stimulation of emotions and the confrontation with another internal dimension of the phenomena, having always as a core and a starting point, the drawing.  The images become references to another ``world``, the one of dreams and rituals where the ``heroes`` appear to strangely transform like actors on the stage of an ancient drama.    The manner in which the drawing is transferred, ``translated`` to each material, consists of dense linear cuts and spots. The density and overlap of these elements is exactly the one responsible for the building up of the tonicity and for the composition of the image.  There is in latin a word for this wound, this cut, for this mark that is provoked by a sharp object, the word punctum. This is even more appropriate to describe the procedure I follow for the depiction of figures, since it refers to the very idea of punctuation and since the images for which I wish to ``speak`` appear truly punctuated by these sensitive marks.     Therefore, I choose the word punctum, in order to describe the very essence of these images, which is no other than punctuation marks of personal expression.»

Εfstratia Machairidi (Ε.Μ) is a visual artist based in Athens.   She was born in Athens in October of 1983 and was raised in Rhodos. She holds a Degree in Civil Engineering from Aristotle University of Thessaloniki (2007) and an MSc in Structural Steel Design (Imperial College, London, 2008).     In December 2014 she successfully entered the Fine Arts School of Athens from where she graduated in June of 2019 from A’ Printmaking Studio of ASFA, under professor Yannis Gourzis. Her studies involve classic printmaking techniques: intaglio (drypoint, mezzotint, aquatint, etc) as well as relief (woodcut, woodblock). For two years she attended the Scenography studio of ASFA, under Professor Lily Pezanou, building up a creative bond between her two fields of studies.    She has participated in group exhibitions, festivals and creative initiatives in Greece and abroad.    Since March 2019 she is employed as a painter of stage design, in the Structural department of the Greek National Opera.