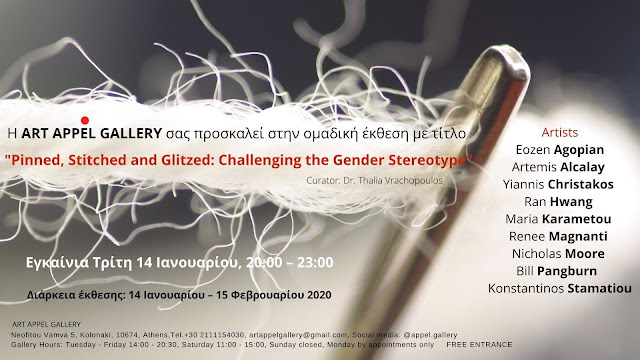 ART APPEL GALLERY proudly presents the exhibition "Pinned, Stitched, and Glitzed: Challenging the Gender Stereotype" curated by New York based Dr. Thalia Vrachopoulos from January 14th through February 15th 2020 with an opening reception on Tuesday January 14th from 8 – 11pm. Unlike sexuality that comes from within the individual, gender role is formed through parental, peer, school and social influences. Many of our early views of life come from the first teachers we encounter. Often our first taste of socially held beliefs such as girls look pretty and are passive, while boys do and are active, are provided to us at this early age. It is important for children to develop strong egos in their socialization phase that can withstand peer and social pressure and to continue in creating healthy relationships.  With this exhibition largely comprised of delicately appliqued, sewn, pinned and woven works, we are challenging traditionally assigned sex roles and preconceived notions about what are and are not female or male work practices. Consequently, we hope to dispel traditional gender assignations to the work of these artists working with methods traditionally considered as “women’s work” because they are delicately and painstakingly produced.  Eozen Agopian for example sews her artworks, a task usually attributed to women, yet she seeks to cross the border of art and objecthood by alluding to painting in her highly worked delicately sewn and woven fabric works. Renee Magnanti’s patterns serve her as leitmotifs in producing works that are interlaced, crisscrossed, or interwoven like fiber art. She combines ethnic patterns in her effort to help us see the common bond between peoples of different geographic backgrounds. The making of Nicholas Moore’s highly embellished canvasses was greatly impacted through his rearing by parents in the fashion industry. Moore’s mixed media works are encrusted and worked with glittery materials that because of their fragile nature may wrongly be considered feminine in gender stereotyping. Ran Hwang’s work has also been influenced by fashion for it consists of thousands of pinned buttons formulating her subjects that range from Buddhist temples, to spiders and plum blossoms. Hwang partakes of the theory of opposites as in the yin and yang of her native Korean country and because of her background in Buddhist philosophy reflects upon the ephemerality of life. Maria Karametou creates intricate, exquisite and dainty pieces that in their fragility signal what would be popularly taken as feminine embroidery. Karametou's work is multifaceted, however, and juxtaposes the delicate nature of what might be found in a female’s dowry in Ancient Greece against the cold, metallic, métier with her title’s references to war or conflict. Bill Pangburn’s multi-color relief prints are defined by linear arabesques that can be associated with ornamental beauty. His vertical scroll format prints are very work-intensive in their use of line that because of their sinuous curves allude to rivers and curvilinear paths meandering through the landscape. Pangburn’s artistic vocabulary, because of its linear quality can be associated with text and calligraphy as well as the act of writing. Yiannis Christakos’ paper works entitled Rosa, consist of fine linear web-like networks that are embroidered with roses. His imaginary maps are for him “ideal space” resulting from his imagination combined with aerial land observations layered with an organic grid. As Christakos says about this body of work “it embodies a complex variety of imaginary symbols, stitching, and cartographical markings, that generate drawn macro and micro topographies.” Konstantinos Stamatiou’s red sculptures Inside I, Inside II, Inside III, are created with straws cut in varying sizes to result in beautiful curvatures that incorporate the space around them. By using straws, Stamatiou has mastered his media to produce ephemeral pieces in which the void is as important as the solid. By so doing, Stamatiou is not only referencing consumerist culture but he also demonstrates concern for the environment. Artemis Alcalay uses embroidery, stitching, or other types of hand-work as a way of accessing history, society, and family while dealing with memory. Her works usually examine the holocaust and its resulting horrors; isolation, suffering, exile, pain.   These nine artists exemplify the break with past models of gender classification embracing the individual aesthetic and unique working method of each show participant. At its core the exhibition questions the idea of ‘women’s work’ by suggesting that it is a social construct perhaps in the service of making the ruling class feel more powerful. It should also take us one step further into de-constructing the traditional stereotypes that in the past have excluded trans-sexuals, and gays.  Curated by: Dr. Thalia Vrachopoulos

Thalia Vrachopoulos holds a doctorate in the Philosophy of Art History from the City University of New York Graduate School. She has curated over one hundred national and international exhibitions and Biennials accompanied by scholarly catalogs. Dr. Vrachopoulos is a Professor of the visual arts at John Jay College of the City University of New York. She has written scholarly essays and reviews for NYArts, Visual Culture AD, Part, +-0 , Public Art, Art in Culture, Art in Asia,  Sculpture, Wolganmisool, Asia Pacific and has been included in many international panels. Dr. Vrachopoulos has co-authored a book on Hilla Rebay the founder of the Guggenheim Museum and has contributed chapters in such books as Weltanschauung, Simon Dinnerstein and Po Kim.