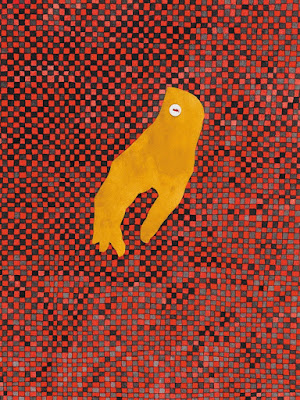 Bernier/Eliades Gallery is pleased to present the solo exhibition of Paolo Colombo, on Thursday January 16, 2020, 19:00-21:00. This exhibition is the second one person show that Paolo Colombo holds at Bernier Eliades Gallery; the first was in 1980.  In his new solo show he presents a series of large watercolors based on poems from his book published by Agra in 2014, as well as recent yet to be published poems. The paintings often appear as large swaths of fabric, mimicking the warp and weft of the material, and rendered by countless lines of watercolor, on which texts emerge as tightly executed embroideries on surfaces of gauze or organdy. The exhibition also features twelve smaller works painted in geometric patterns, often reminding us of mosaic tassels.  The smaller works have a strict painterly approach, and are worked with much attention to composition and texture. Paolo Colombo almost exclusively employs watercolors and drawing; they have been his constant media since he began his practice in 1971.  Paolo Colombo has been living in Athens since 2008. He has had an on-going curatorial practice since 1986, collaborating with a number of museums and kunsthalles worldwide. As a curator, in Athens he has collaborated with the Benaki Museum, The Museum of Cycladic Art and the Onassis Cultural Center. He was the artistic director of Biennales  in Istanbul, Thessaloniki and Mardin and associate producer of three award-winning features in Cannes, Berlin and Venice.