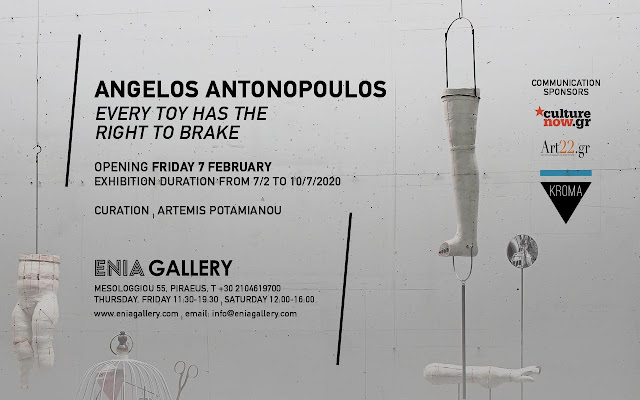 The exhibition of Angelos Antonopoulos constitutes a visual narrative-comment on man's relationship with authority. In three installations/acts, the artist wishes to provide viewers with an experiential course through the multiple facets of authority and its collapse. Older, 'mutated' works of the last decade and new creations seen through an overall perspective enable a more meaningful reading of the artist's work.

The first act, which provides the preamble as well as the epilogue of the narrative, unfolds as soon as the viewer enters the space. The white cube of the exhibition space becomes the perfect canvas to host the equally white installation of Antonopoulos. The initial illusion of order and serenity generated by the objects whose colour makes them hard to discern is soon dispersed as the gaze gradually attunes itself to the space. The installation consists of fragments of doll limbs and bodies, artefacts, porcelain ornaments, parts from strange cages, tables and buildings that float in the air, supported but also pierced by hosts of metal plates. They seem to have undergone an almost violent process of deconstruction and reconstruction, consummating the metaphysical aspect of the disparate images and raising questions around such notions as the natural and the artificial, the strange and the familiar, experience and memory. The installation almost points to a cruel scientific experiment meant to explore the individual elements and produce new constructions. It functions like a Cabinet of Curiosities, a kind of private micro-museum filled with strange objects; a “memory theatre”(1) with direct reference to “toys” and the artist's childhood experiences.

Antonopoulos organises the white exhibition cube with a visual system of axes marked with pencil on the walls—a choice based on his earlier painterly practice—which gradually move out of the two dimensions to form a 3D grid among the artefacts. Here, they are not meant to be a visual system which imposes a structure of order; instead, the installation appears as a hybrid, a 'guinea pig' that the abuse of power has left as an ailing body similar to a latter-day St Sebastian.

In this microcosm, Antonopoulos plays around with order and chaos. Parts of the installation are reminiscent of the viscera of hybrids derived from structures, toys and shells of buildings. The almost dreamlike initial picture gradually gives way to a weird, nightmarish landscape. Other parts of the installation are slowly turning, constantly changing the work and reversing the viewer's role: instead of the viewer determining the point and the route of viewing among the exhibits, he remains fixed before a moving work. The condition of the small, slow motion of the installation's merry-go-rounds generates a game of searching for the fragments that remain unchanged and those that keep changing in relation to both the space and the rest of the exhibits. The construction of the installation's surrealistic fragments generates a mysterious, paradoxical feeling akin to the concept of the Uncanny as it is described in Sigmund Freud's essay of the same title.(2) The work raises questions relating to dipoles such as inanimate/living or difference/normality and what determines them.

As viewers continue along their experiential route, they are called upon to choose a course through two rooms which build on the artist's probe into man's relationship with leadership and authority.

Upon entering the left-hand room they come against a dark, almost black space; their vision needs to readjust in order to discern the shells of buildings that represent forms and systems of authority. Here the architectural shell of the Greek Parliament coexists with the German Reichstag, the Kremlin and the White House.
The molten Greek Parliament is precariously balanced on a hemispherical structure while the image of decomposition of the overall sculpture is mockingly reflected in a mirror. The black shells of the Reichstag and the Kremlin converse and produce a "stage set" for some sinister play. The small-sized White House presents a strange image at odds with the power and impact of its decisions.

The buildings in the installation, deeply associated with political and social systems, convey a picture of decay and distortion and make up a monument dedicated to citizens' incessant struggle to survive against the adversities of the times. The artist has formed a “no man's land” where past, present and future coexist: past decisions and approaches shape the present, and the present shapes the future. Democracy, man's relationship with leadership and the collapse of authority, institutions and values are only some of the questions raised by the artist.

The third act in the visual narrative is completed as the viewer enters the last room. The protagonists here are not the buildings where decisions are made but the figures behind them. The room is a hymn to a patriarchal society. The first thing the viewer sees is dozens of male portraits, distorted and smudged with black graphite. The sole exception is the eyes of the old photographs which seem to follow you everywhere, and the white lapels of their suits that emphasise their gender; they remind you of the old photographs of the man-paterfamilias that invariably adorned the houses of old. By obscuring all individual features, the artist creates portraits-symbols of every man of authority and generates a sense of mystery which is further intensified by a palette limited to neutral colours.

Authority here is not faceless. Antonopoulos explores issues around the exercise of power within the confines of family relations. The installation also incorporates old photos of women posing in their wedding dresses, defaced with graphite. The faces and the background are erased again to give the leading role to the wedding attire, perhaps as an indication of reception and induction in the patriarchal system. A floating building provides, through small windows that function like keyholes, glimpses of forbidden scenes of lust.

At the end of the tour the viewer comes before a large box—a space within the space—in which a floating 'urban' building seems to defy the conventions of gravity. The construction of the surrealistic western-style house poses questions around the social context of the bourgeois environment.

Overall, the exhibition constitutes a lyrical Cabinet of Curiosities, a micro-museum, a journey into the artist's preoccupations, questions and works that deal with contemporary man's views and attitude towards the socio-political milieu as he strives to emerge as the main protagonist.