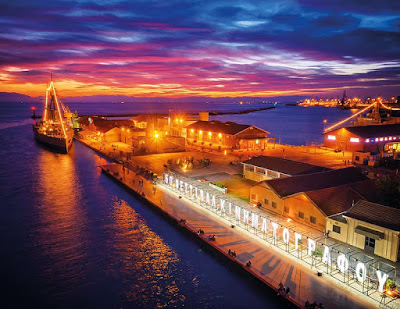 The Overview Effect, an experience that can shake human intellect to its core, is the prism through which the 60th Thessaloniki International Film Festival (October 31st until November 10th 2019) views the 14 films of the International Competition.

For the third consecutive year, TIFF proposes a subversive approach to cinema by seeing, interpreting, commenting on IC films through a theme, a book, an idea, taken from another art or science.


The concept behind this year’s IC
This years’ concept is The Overview Effect. Researcher and author Frank White named this phenomenon in 1987 with the intention of describing astronauts’ unprecedented emotions when they encounter the Earth’s view from space for the first time and perceive the world in its entirety.

Trying to analyze their experience, astronauts say that something changes inside them and talk about a burst of awareness, a feeling of wholeness and unity. At the same time, they note that the beauty of seeing the Earth from space made them think of the inequalities, poverty and conflicts on its surface.

“The Overview Effect is about the way we look at the Earth, life, ourselves from afar. How we discover that the things which seem to separate us on Earth, disappear when you look at them from a distance. The fact that astronauts can’t see borders, class, social, cultural or religious differences makes them realize the harsh reality of life on Earth. The Overview Effect does not just lead to a cognitive shift, but is also a call for action” explains the artistic director of Thessaloniki International Film Festival, Orestis Andreadakis.

The exhibition
Based on the “Overview Effect” concept, TIFF invited young Greek artists to watch the films of the IC section, become inspired and create original works for each one of them. These works will be presented for the first time in the exhibition organized by TIFF in collaboration with the Experimental Center for the Arts. The artists are: Alexis Vasilikos, Giorgos Gerontides, Christos Delidimos, Marianna Ignataki, Kalos - Klio (Xristos Kalos and Klio Tantalidis), Irini Karayannopoulou, Panos Kompis, Manolis D. Lemos, Virginia Mastrogiannaki and Elias Mamaliogkas, Konstantinos Patsios, Antigoni Tsagkaropoulou, Pavlos Tsakonas, Despina Flessa, Zoe Hatziyannaki.

The exhibition is organized in collaboration with the Metropolitan Organization of Museums of Visual Arts of Thessaloniki (MOMus) This years’ theme is in an open discussion with the theme of the 7th Thessaloniki biennale of Contemporary Art (October 12, 2019 – February 16, 2020), with the title “Taking a Stance”.

Here are some of the films of the IC section:
Monos by Alejandro Landes (Colombia/Argentina/Netherlands/Denmark): A group of teenagers lives isolated in a remote area. Strict rules, rituals, dangerous “games” with guns increase the insanity among the young members of this strange gang. A thrilling film that premiered at the recent Berlin Film Festival and won a Special Jury award in Sundance Film Festival.

Song Without a Name by Melina León (Peru): A moving debut for those who loved Roma by Alfonso Cuarón, Song Without a Name tells the story of a young woman whose newborn daughter is abducted. Her trajectory will bring her close to a journalist who leads the investigation.

Patrick by Tim Mielants (Belgium): 38 year-old Patrick lives with his parents in a naturalist camp. Everybody knows him, but no one seems to like him. When his father dies, Patrick has to start making decisions. The only problem is that he has lost his favorite hammer. Flemish director Tim Mielants won Best Director award in Karlovy Vary.

Fire Will Come by Oliver Laxe (Spain/France/Luxemburg): Amador Coro, who has been convicted for arson, leaves prison and returns home, to a small village in Galicia, where his elderly mother Benedicta lives with their three cows. Life goes by, following the rhythm of nature, until one night a devastating fire starts.

Lillian by Andreas Horvath (Austria): Lillian is a Russian emigrant, living in New York. When her visa expires, she will decide to walk all the way home. The directorial debut of Austrian director Andreas Horvath was screened at the Directors' Fortnight at Cannes.