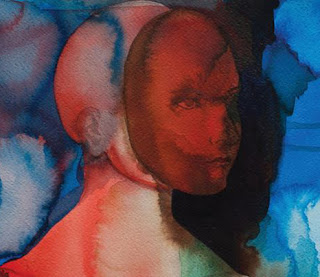 Corfu welcomes international artist Ellen Hausner for her first art exhibition in Greece, with a title inspired by Homer: Through Restless Seas. The Attic Gallery is delighted to host this retrospective exhibition, which traces several years of evolution of Ellen’s multifaceted work. Ellen Hausner conceives of her artworks as explorations of the ephemeral and the unseen. Born in New York City, she grew up in Asia, in cultures where both worship and meditation are an integral part of everyday life. This constant sense of the sacred permeates her work, which explores the themes of transformation, transmutation, and evolution. She allows subconscious and deeply hidden elements of the psyche to come to light through the suggestion of the paint. Her work reveals that which is concealed within, and her aim is to create work that appeals directly to the senses and the psyche. She says of her art: "I conceive my paintings, drawings, and prints as explorations of the ephemeral and the unseen, whether the subject is a psychological state, a microscopic particle, an abstract concept, or a moment in prehistory. Creating images of that which does not have an image is what binds all of my work together. In the past, I did this in a way that echoed surrealism, employing a specific symbolic language to express concepts and ideas. As my work has developed over the years, I have allowed abstraction to take the unseen and express it more viscerally. Now I move back and forth between abstraction and the figurative, but the aim is the same: to give visual form to the forces of nature which cannot be visualised directly. Through my work, I have tried to grasp and express the meaning of the actual spark which enables life to occur".

About the artist
Ellen Hausner was born in New York, spent her childhood in Nepal and Bhutan, and her teen years in Africa. She studied in the USA and then worked in Sweden, Ireland, and Great Britain, where she settled and now works at the Bodleian Library in Oxford.

She is an elected Associate of Magdalen Road Studios (MRS), an artist’s cooperative in East Oxford; in August 2016 she was MRS’s Artist of the Month, and again in January 2019. In 2018 she was selected as an Associate of OVADA, the Oxfordshire Visual Arts Development Agency. She has been involved in various projects relating to the arts, including working as a studio assistant to Richard Hunt, an artist with Down’s Syndrome, during his residency at MRS; a film about his residency in which she features can be found here. She also participated in an arts collaboration project between MRS and Shadowlights artists, who have learning disabilities. Another major project was an exhibition she curated which ran alongside the Oxford University academic conference Art and Articulation: Illuminating the Mystical, Medieval and Modern. She also participated in an artist’s panel at the conference.

Since 2003, she has been an assistant in conservation and restoration studios in Ireland, England, and Sweden, working with original artwork from the sixteenth century to the present.

Ellen’s artistic training began in her childhood in Nepal, and continued in New York and Sweden, while she graduated from Hetherley’s School of Fine Art in London in 2012. She has participated in numerous group exhibitions in Sweden and the UK. “Through Restless Seas” is her 7th solo exhibition, and her first in Greece.

Exhibition and Artist’s Talk
Through Restless Seas opens on Saturday 8th June at 8pm, at the Attic Gallery. On Saturday 15th June, Ellen will be giving a talk where she explores her artwork in depth. Creating images of that which does not have a visual form is what binds her work together, whether it is a a psychological state, a microscopic particle, an abstract concept, or a moment in prehistory. Her work is founded on direct experience, and her artwork seeks to capture that knowledge in colour and shape. In an evening of mysticism and sensual beauty, she will discuss her artistic process, the symbolism of the colours she uses, and her subject matter, as well as her influences.