Performance "The Visceral Humming of the Spiral" 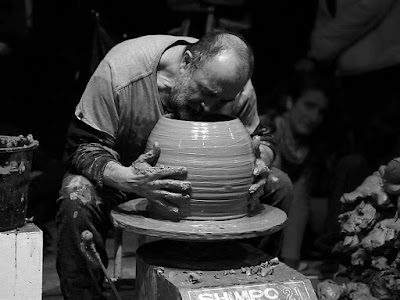 An interdisciplinary performance, lasting about 40 minutes

An important chapter in Greek historiography and archeology is structured on countless ceramic finds. Pottery is metaphorically the “water” in the body of Greek art history. The use of the word "body" itself is highly appropriate in connection with ceramics, as there is clear methodological data that leaves no room for doubt: the majority of vase names in ancient ceramics come from the common root -κυ- (of the verb κυέω, which means in ancient Greek being pregnant); furthermore, the terminology of ceramics draws on terms based on the human anatomy, such as mouth, neck, shoulder or belly.


The ‘body’, born, as it were, through the pottery wheel, is a primeval aspect of the concept of the body in general; this is the central idea of the performative project presented by Hector Mavridis, Savina Yiannatou and Costis Drygianakis. The dynamics of the helical movement of the pottery wheel (a movement that is reminiscent of the helical movement of human DNA)  creates a feast of earthly senses and creativity, which gives shape to the unformed, structure to the undefined and solidity to the abstract shape of the clay. The artist himself turns into a spiral, engages, dances and flows with his own body in every movement of the ceramic wheel, becomes one with his artwork while shaping it; through his emotions  he energizes the plasticity of creation and, with the most delicate gestures, he transforms the flesh and the structure of the clay, breathing and moving with it, as a single body.

In parallel with this transformation of the clay, the dynamics of the human voice by Savina Yiannatou externalize every emotion, express every trace of body pain and labor; vocalist Yiannatou through the raw material of phonology, performs a transformative re-articulation of speech, while the electronic sounds of Costis Drygianakis, a collection of raw sounds drawn from life, including the process of pottery itself, embrace the creative space and animate the magical manifestations of the performance process.

The aim of this interdisciplinary example of performance art, "The visceral humming of the spiral", is to highlight fundamental, archetypal issues of visual creation: to bring together, seamlessly, sonic, vocal and gestural expression, and to activate our own relationship with our senses. The performance is a lyrical synergy, the parts functioning as a unified body that articulates and enacts every aspect of human expression and, indeed, the very essence of creation itself.
The curatorial text bears the signature of Miss Areti Leopoulou, Art historian –  curator of the MOMus - Museum of Contemporary Art