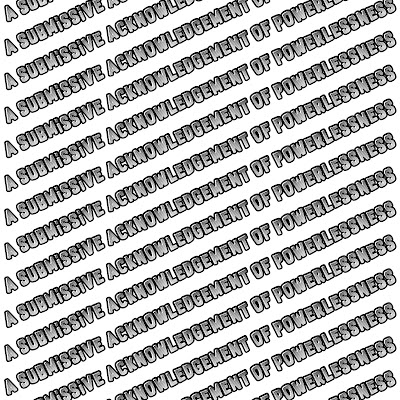 The Breeder is pleased to present “A Submissive Acknowledgment of Powerlessness” a solo show by Andreas Angelidakis. Yellow is a color used as a standard construction signifier. It is a color associated with sunshine, hope and happiness, but also the color of cowardice, sickness and jealousy.

Architecture is described as the process of planning, designing and constructing buildings, and as such it is often used in displays of power, success and development. But architecture is perhaps the one art most subject to the overpowering influence of economics, legislation and the random personal preferences of the commissioning party. The strong, controlling and most times masculine architectural gesture is, in fact, an endurance of compromise, weakness and submission. Building products, despite, or even because of their vigilant adherence to profit, and their destiny as economic development tools have no choice but to be understood as symbols of powerlessness and complicity with systems of greed.

With the exhibition “A Submissive Acknowledgment of Powerlessness”, Andreas Angelidakis continues to research the ways that external forces shape our built environment. Picking up from the work “Unauthorised”, presented during Documenta 14 in Athens and Kassel, and which examined how geopolitics, profiteering and government corruption shaped the city of Athens, a new set of works explores the ambiguities, contradictions and weaknesses of architecture. Taking further notes from the city of Athens, and its downtown neighborhoods almost entirely covered in graffiti, Angelidakis wonders if adding a layer of text onto a building is the only way to help it say something meaningful. As graffiti covers weak modernist buildings shaped by petty profit margins and corrupt governance, they become reactionary, political, buildings with a voice.

A group of 3d printed building-frames assume the typical, affected posturing of starchitecture developments, their slabs and columns twisting and turning, bending and arching to become desirable and attention worthy. Meanwhile, they are entirely covered with potentially contradictory graffiti, phrases picked up from random readings, such as “no master no plan”, or “stock narrative” used here to describe their weaknesses and faults. By receiving a voice, they suddenly attempt to speak their truth, the result both humorous, or downright cynical.

As if steered by an indecisive, perhaps even Queer Diogenes, Angelidakis looks at the state of architecture as a metaphor for our entire moment of being, a diagnosis of our times: We understand the futility of our financial, environmental and social practices, yet we, perhaps involuntarily, continue to participate in these systems of failure. A new seating piece from the series of “Domestic Ruins”, is upholstered in clear vinyl. Even though the forms are recognizable as building shapes, the clear vinyl reveals the foam padding of a sofa. The work is textured mapped with the phrase “Ignoring Conceptual Contradictions”, as we.

Andreas Angelidakis was born in Athens in 1968. He studied Architecture at the Southern California Institute of Architecture (SCI-Arc) and continued his studies at Columbia University (MSAAD) in New York where he graduated in 1995. From the beginning of his career, he has been working at the intersection of art and architecture, often expanding onto other disciplines such as curating and writing.