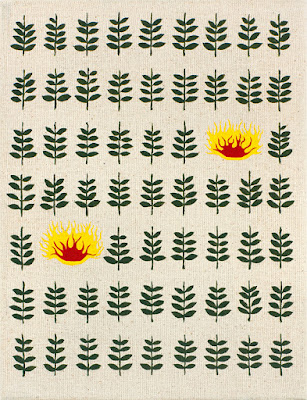 Chili Art Gallery (13-15 Dimofontos & Irakleidon Str., Thission, Historical Center of Athens, Greece) has the honor to host the first solo exhibition of the famous Colombian artist Manuel Hernández-Ruiz "Mantra" in Greece, curated by Paris Kapralos, and invites you to attend its opening, which will take place on Tuesday 18 of June 2019 at 20.00.

Issues of identity and holistic perception / wording of the world incur in the work of the Colombian painter Manuel Hernández-Ruiz. These quests are formulated as abstract gardens.

"The Gardens are a contemplative declaration revealed through a plastic language that develops to a formal perpetuity. They are inspired by comics, Tibetan murals,ornamental Muslim and western medieval art and iconography. Formally they oscillate between a figurative abstraction and a coded symbolism that takes as a starting point the isolation and analysis of a particular language from my previous work, between comics and the underground graphics.These paintings, watercolours and ink drawings function as silent emblems spreading in the cosmic drama of uncertainty, visible as eternal networks navigating withinits own autonomy", the artist declares in an older note accompanying the series".

Plant symbols are a part of the cultural treasure of humanity, whether we consider the archaic secular traditions or religion, heraldry etc., throughout history until the present day. To flowers, in particular, there have been attributed particular meanings over thousands of years. Every art form has involved flower symbols at some point, but in painting they have an outstanding presence. Early paintings are rich in philosophical and Christian plant symbolism, while 18th–20th century art movements have added new meanings to vegetal-floral symbolism, through the personal perspective of various artists in depicting plant symbols.  Ruth Ammann, a renowned Jungian psychoanalyst, has published a book on the psychological semantics of gardens, in which she tracks the etymological origin of the word to the Indo-Germanic word “ghordo” – fence, enclosure, stockade, hence denoting a fenced-in or enclosed area. She marvels at a coincidence: “Incidentally, ‘paradise’ has the same meaning, originating from the Old Iranian words ‘pairi’ (enclose, surround) and ‘daeza’ (wall). Thus, paradise is first of all a place or site surrounded by a wall. However, it encloses a particularly sacred place, namely the Garden of Eden, the garden of bliss.” At its root, a garden and a paradise are one and the same thing. Ammann points out that the garden is enclosed and bounded on the horizontal plane, but it is open on a vertical plane, that is, “unbounded toward the sky and the depths of the earth.” It connects heaven and earth, the mundane changeability with the eternal permanence. The existence of the fence subscribes the idea of the garden to a sealed alchemical vessel. It is a receptacle, where the raw material of the chaotic nature is transformed and cultivated through the gardener’s hard work in balance with a profound respect for nature and the universal equipoise.

ARTIST STATEMENT
"Probably the most difficult thing is to have the certainty of who one is. Even today it's an arduous task to define myself, especially when one conjugates several contradictions that break with the idea of having a specific north. In this context, an artist statement is a short-sighted work that may be incomplete. I can commit the injustice of leaving aside aspects, obviating them unconsciously. The Overview effect is a phenomenon that astronauts experience when going out into outer space and observing the planet earth in it's entirety; they notice a cognitive change of consciousness in which they see the disappearance of borders and the need to create a global society in peace. Carl Sagan's thoughts on the Pale Blue Dot photography points in that direction. A group of blind men comes across an elephant and when trying to decipher it's physical nature, they each touch a different part of the animal. The result is an erroneous notion of the pachyderm to believe that it's a trunk, legs or a tail. The Indian parable of the blind and the elephant illustrates that subjective vision that can only be overcome when the different points of view manage to reconcile in a great total vision; back to observe the whole picture. Maybe I am still like those blind people, manifesting through my work, different parts of a great whole that I only intuit with glimpses. I keep scrutinizing in my context and in my psyche. I'm still painting, drawing, writing and rambling with the hope that one day I can see the elephant in its entirety".

About the Chili Art Gallery
Chili Art Gallery was founded in 2010 and is located in Thiseio next to the Cultural Center of the City of Athens "Melina", a breath away from the liveliest part of our city, Gazi. It is a cultural area, where the art lovers and the public in general can come into contact with all forms of Contemporary Art. The main goal of Chili Art Gallery is to support emerging and well-known Greek and foreign artists.
Email ThisBlogThis!Share to TwitterShare to FacebookShare to Pinterest
Labels: Athens, ENGLISH, Εγκαίνια, Εκθέσεις, Ζωγραφική, Τέχνη
Newer Post Older Post Home