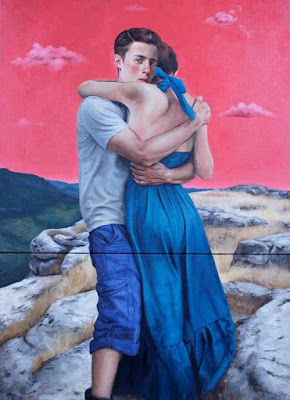 Ikastikos Kiklos DL presents on Tuesday 12 February 2019 the solo exhibition « Reality » of Vassilis Selimas. The exhibition comprises twenty small and large works—acrylic on canvas or paper and pencil drawings. Anthropocentric painting, dark compositions alternating with works full of light and bright hues. Most of the works were produced in the last three years and constitute a special kind of personal journal. The title came from the work of the same name, Reality, which combines the logical and the absurd through the humorous rendering of a portrait.

Collector Christos Christofis notes among other things: "I have been following the work of Vassilis Selimas since his collaboration with the Vogiatzoglou Gallery and the exhibition Building 1 of three years ago. He continues to paint mostly portraits, of children and adults. Vivid colours, a clear script and high technical proficiency characterise his current work." In his recent article "For a painting of self-knowledge", Manos Stefanidis, talking about contemporary Greek painting, ventures a prediction about who the classic painters of tomorrow may be; Vassilis Selimas is among the approximately fifteen noteworthy artists he shortlists. For all their broad thematic span, his work 'flirt' with the reasonable and the absurd, each, to a different degree, and make up a body of work with an interestingly paced mixture of normalcy and deviation. The work "Reality", of a seemingly humorous nature, lies at the 'paradox' end of the scale while "The hug" occupies the other. 'normal' end. By contrast, there is no fluctuation of emotions. The heroes in all his works seem "comfortably unhappy", as the poet Nikos Karouzos would say: "Art is a manoeuvre of happiness so that we can exist in something of a comfortable unhappiness.’’

Vassilis Selimas was born in Agrinio in 1983. He studied at the School of Fine Arts of the University of Thessaloniki from 2003 to 2008. He has had two solo exhibitions, He lives and works in Athens.