Elika Gallery presents "A truth about a lie" 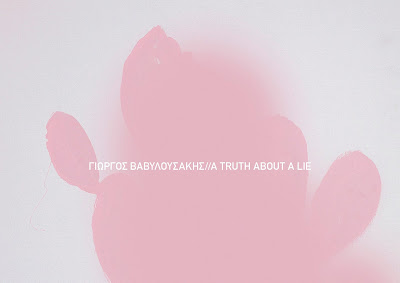 George Vaviloussakis at his solo exhibition at Elika Gallery, titled 'A truth about a lie', presents a series of works where images and consumer goods are introduced within a new frame of reference and are the subject of further exploration. The inspiration for this painting unit derives from simple images of everyday life, objects and products filtered through the aesthetic stimuli of the internet. They are rendered here spontaneously with a few clean brush strokes and through a palette of three colors, white, black and a shade of light red. Part of the creative process is the element of coincidence, the random; the work continues to complete itself, as the still fresh colors create drifts.As excerpts of a flowing reality these images are the everyday environment of a whole generation, composing a common experiential perception. They act as levers of emotion shaking, as through their use and through custom they create individual and collective identities. The works narrate a living story with consistency and uniformity, which raises the doubt of rationality and reality itself. For Vaviloussakis the lie becomes the expressive effect, namely the reconstruction of the truth, composing a personal world as true as a perfect lie.

George Vaviloussakis was born on the Greek island of Chios and is currently based in Athens. He Studied Fine Arts at Athens School of Fine Arts and Magazine Production & Design at Central Saint Martin’s College in London UK in 2001. From 2004 until 2010 he worked as a tutor, focusing on digital media development, at the A’ Lab of Athens School of Fine Arts. Ηis works have been exhibited in numerous galleries and he has also participated in various art festivals worldwide (Market & Democracy, In-Between, Brussels, Belgium, 2013, BAC! 07, International Festival of Contemporary Art, CCCB Barcelona, Spain, 2007). In March 2016 he curated the Paradise Exhibition at Pirée Art Space in which he participated as well. With award winning project in his resume, he is also active in the field of creative design and interior architecture.