Marianna Ignataki In a deep, dark forest they were braiding the beards of parrots in love 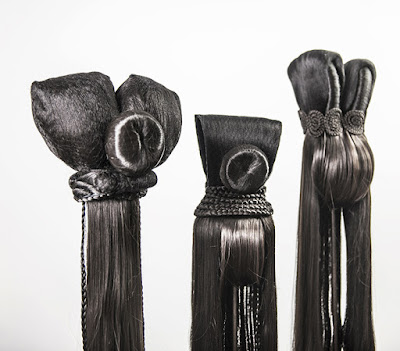 Marianna Ignataki's solo exhibition at Alatza Imaret deals with issues of gender, identity, otherness and exclusion, through images and sculptures that seem both beautiful and grotesque. Figures that appear both dominant and dominating, that show no signs of vulnerability that lie hidden or reveal themselves behind masks or hair, juxtapose alternating and coexisting concepts of both the terrible and the absurd. Referencing Chinese philosophy and tradition, bearded ladies and hairmen, the circus and the opera, the artist introduces us to a world where “being different" is not only the subject of urban myths, clichés or carnival disguises, the subject of anthropological curiosity or ridicule but a new reality/regularity. Issues of racism and race are placed side by side to issues of gender identity. According to Darwin's theories of sexual choice the beard of a white woman only casts doubt on her gender, while a beard in a black woman even disputes her origin as human. Similarly, instances where gender identity or gender expression differs from the assigned sex are treated as exotic birds. Ignataki’s works take us exactly there, into the deep, dark forest where there are parrots in love.
Marianna Ignataki was born in Thessaloniki in 1977 and she currently lives in Berlin. She begun her studies in architecture at the Technische Universität in Vienna and then she moved to France where she studied Visual Arts at the School of Fine Arts of Saint-Etienne. Between 2010-2017 she lived and worked in Beijing, China. She has had six solo exhibitions to date, namely “Josie, the Armor and the Hairman” at CAN Christina Androulidaki gallery, Athens (2017), ”The End of Magic" at Outpost Project Space, Amsterdam (2012), "Sphinx" at Fake Space gallery, Beijing (2011), "This Joke Ain’t Funny Anymore" curated by Apostolos Kalfopoulos at Zina Athanasiadou gallery, Thessaloniki (2009), "Coitus Interruptus" (double solo show) at Public Room Project Space, Skopje (2008), and one more show in cooperation with Lola Nikolaou at Fleming gallery, Thessaloniki (2004). She has participated in a number of group shows in Greece, China, Spain, Holland, France, Germany and the US. She is represented by CAN Christina Androulidaki gallery, Athens