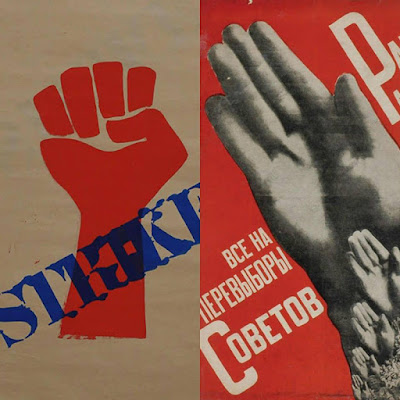 The State Museum of Contemporary Art in Thessaloniki, Greece, is presenting the exhibition of Harvard Strike posters, Spring 1969, Alexander Tzonis and Liane Lefaivre collection along with 150 artworks of Russian avant-garde-Costakis Collection 26.09.2018-24.02.2019. The exhibition will open on the 24th of October at 20:00.

Alexander Tzonis writes about the era represented in his collection shown in the exhibition: "The years of the 1960s and early 1970s were a long spring but also ‘years of lead.’ They were years of joy but also dissent, anger and violence. They were destructive and could have set the whole world in ﬂames, with its oppressive power establishments, bogus values and beliefs, hollow ways of life. But they were also years of unique political imagination and cultural creativity. Music was the highest artistic form of the period, but the period also produced publications with unprecedented graphics that blended text, photographs and ﬁgures. The posters of the Harvard Strike, exhibited here, are perhaps the most signiﬁcant examples of this culture. They were not only unique political and cultural documents but also exceptional works of art, most of them made in a short time, a period, a little more than a month, and in a limited space, the Design School’s Robinson Hall, in Harvard Yard. These were years when protestors all over the world, mostly students and the young, wanted to put an end to the ‘miraculous reconstruction’ that boosted GDP ﬁgures but failed to take into account so many underlying realities: urban riots, environmental devastation, inequality, racism, male chauvinism, the chain of political assassinations, the unrelenting news from Vietnam’s never-ending bloody war, the mounting hidden costs of the cold war and, last but not least ,the hypocritical role of educational and official cultural institutions exploiting local communities. Perhaps not altogether consciously, the Harvard poster makers joined a long line of artists who, like early twentieth century artists in Mexico and revolutionary Russia, used prints as a medium to communicate a message of liberation. The Harvard posters might even belong to an even longer tradition of the ‘danse macabre’ genre, going back to the 16th century, that viewed printed works of art as a medium to communicate a militant humanistic message against oppression. It has been written that mechanical reproductions are the product of commercialism that kills human spirituality. However, as one can ﬁnd in the Harvard posters, next to their universal radical humanistic message, their surface captures aspects of the printer’s ‘touch’, the muscular pressure of the printing hand, the personality or mood, the breathing and through that the story of our time".
Email ThisBlogThis!Share to TwitterShare to FacebookShare to Pinterest
Labels: Conferences, DESIGN, ENGLISH, Museums, Thessaloniki, Εγκαίνια, Εκδηλώσεις, Εκθέσεις, Ιστορία, Συλλογές, Τέχνη
Newer Post Older Post Home