Ismini Bonatsou: Art is an Ark at Cube Gallery 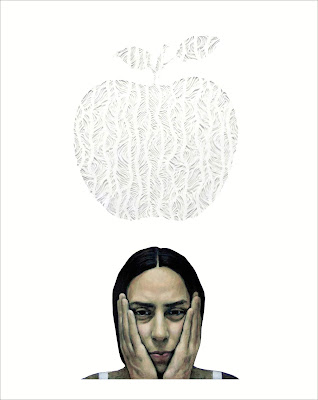 Cube Gallery, for the month of October, hosts the new work of the artist Ismini Bonatsou, in her solo exhibition entitled “Art is an Ark”.   Talking about the artworks of her exhibition, Ismini Bonatsou refers that they are: “An Ark of souls and lives, humans and animals. Ark for wandering children, that have a suitcase as home. But for animals, that are too defenseless: animals to be eaten - victims of a faceless industry of meat, sea whales, pets. Finally, there is a position for the adult, who has the responsiblity of its power for the loss or for the creation of a heaven on earth”.  In the section child, the artworks begin in 2015 with the refugee topic. We have, between others, Iketis (2017), with the tragedy “Oedipus in Colono” as a background and a motive. Behind the little girl with the suitcase, stands as a terrifying figure, fear. It chases her. The child bears as miasma war, killings, blind hatred. She bears the sins of all the parents and ancestors of the world.  In the section animals, we can see children figures and women, in contrast with the black and white figures of animals to be eaten: rabbit, goat, pig, chicken, sheep, cow, turkey. The image does not depict violent moments, it does, however, insinuate the violence that animals get, the wounded animals, the meat industry. Alongside and antiperspirant, we are seeing the child playing with sea animals: an image of harmony and carelessness, with more colour. But black and white appears yet again, when the fish is on the net. Remarkable, when examined from a technical aspect, in these works it is the net that offers multiple levels and adds depth. Finally, in the third section of the exhibition Art is an Ark, we have the adult: the self portraits are referring in the anxiety of the lost paradise, the planet’s disaster, in dead end.

According to the art historian and substitute professor in the University of Ioannina, Dora Markatou:  “The frontal position in self portraits can translate the intention of the painter into a feeling, to refer to the viewer and pass on the message of her agony, not as an authority, as usually this stance is interpreted in portraits, but as the crush of the person who has realized the danger, and wants to cooperate with his fellow man, so that he can react before the threat of loss, not of paradise, but life.  The mute shape of the artist in all the variations of her depiction in the genre of “speaking” self portrait, “speaks” eloquently with the expression of the eyes, the hand stance, and the contraction of her face, so her scream is painted, as taught by expressionism and symbolism, to pierce even through the complacent consciousness, and rejoice as a symbol of a suffering subject”.

Ismini Bonatsou graduated from the Athens School of Fine Arts (1986-1991). She did post-graduate studies in painting, with a scholarship from the Spanish government, at the Facultad de Bellas Artes of the University of Barcelona (1993-1994), and holds a Master’s degree from the School of Architecture of the National Technical University of Athens (2010-2012). From 1995 to 2007 she was cooperating on a permanent basis with “SFERRA” Cultural Foundation in Amsterdam as an illustrator and art editor for the Foundation’s printed materials. She has also cooperated as an illustrator with the radio-TV production company Teleac/NOT, Hilversum, the Netherlands. She has worked in stage design projects, illustrated books for children and made CD covers in Greece and abroad. (Nikos Papazoglou: Magissa selini, Andreas Karakotas: Ichnographies, Pleiade: Een muzikale rondreis door Griekenland, Chanson 2000, De wereld van het Franse chanson). She was a founding member of the street art group ’Cookless’. She is a member of the art group ‘Tehnopaignion’. She has presented 13 solo exhibitions in Greece, Belgium and Spain and has participated in group exhibitions in Greece, Belgium, Austria, Holland, France, Spain, England, Cyprus, Turkey, Ecuador, China and Russia.