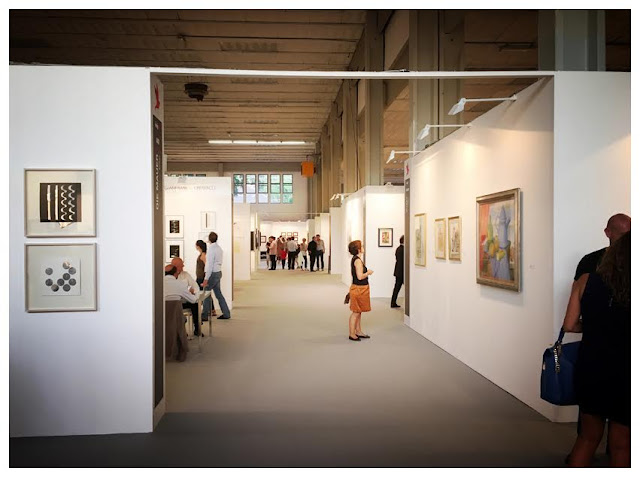 Technohoros art gallery inaugurates the new artistic year and the program “Out of the Walls” with its participation from 20th to 23rd September in the international art fair Wopart Lugano 2018, in Lugano of Switzerland. At Booth E 15, five Greek artists of international activity and fame, compose an area of ​​outstanding visual interest in an art fair in which a Greek gallery participates for the very first time. Constantin Xenakis, Christos Santamouris, Venia Dimitrakopoulou, Thalassini Douma and Christos Giannakos exhibit paintings, engravings, photographs and art books processed exclusively on paper.

Wopart Lugano 2018, presents works of art that touch the whole spectrum from classical to modern art, crafted exclusively on paper. This year, the galleries which participate are more than 90 from 14 different countries and they are displaying paintings, engravings, photographs, sculptures and art books creating an ideal meeting point for art, art collectors and art lovers. Constantin Xenakis was born in Cairo of Egypt in 1931. He studied interior architecture and design at École Supérieure des Arts Modernes (Paris, 1956-1957) and painting at Académie de la Grande Chaumière (Paris, 1957-1961). In Wopart Lugano, Technohoros art gallery presents works of Constantin Xenakis from his long-running course on the international art scene, touching on issues of modern society and everyday life, crafted with his own personal and recognisable style and through the visual code he has conceived by his own. With symbols borrowed from road traffic, hieroglyphics and sciences, Constantin Xenakis creates visual worlds that are perfect "languages" and they touch the semiology.

Venia Dimitrakopoulou was born in Athens. She studied at the 1st Sculpture studio of the Athens School of Fine Arts, drama at the School of Dramatic Art of the Athens Conservatoire and she followed courses in design at the Atelier Vivant of the École Nationale Supérieure des Beaux-Arts. Having strong influence from her homeland, Greece, she has presented her work in many solo and group exhibitions in Greece and abroad, while in Wopart Lugano she is displaying artworks crafted by indian ink on chinese paper. As she mentions: “I am a Greek sculptor. I work with a wide variety of materials – stone, marble, wood, metal, glass, digital images and sound. This helps me investigate more aspects of artistic creation. Influenced by my studies in theatre and music, I seek to combine the visual arts with music and drama to bring together narrative and conceptual approaches in a unified whole, directed at both emotions and intellect” and she adds “Not only do I think art possesses a therapeutic value, I know it does. In these artworks (Mapping Oneself) the gesture becomes soft and inward, the work refers to a state of a mental imprisoning, a mapping of the spiritual caging, and an obsessive state that through the creative procedure, eventually becomes liberation, redemption, release. This is for me one of the stronger key points of art: A way of metamorphosing the world”. (Extracts from the interview “Dialogo con Venia Dimitrakopoulou”, curated by Matteo Pacini, given in occasion of the exposition “Selected works” - April/May 2016 held in ARTESPRESSIONE Milan).

Christos Santamouris was born in Tinos island of Greece. He lives and works in Greece and France. He studied at the Drawing and Sculpture School in Pyrgos of Tinos and at the Fine Arts in Athens and Paris. Since 1988, he also worked as a Professor of Engraving at the Academy of Fine Arts in Chaville. He has displayed his work and he has been awarded in Belgium, France, Germany, Greece, India, Italy, Canada, China, Korea and Cyprus. In Wopart Lugano he presents embossed handmade engravings (gaufrage), drawings and art books. A big part of his work is influenced by the work of Nikos Kazantzakis and especially “Ascese”, while his whole work is inspired by the concepts of the creation, of change, of the perpetual struggle for the transformation of the matter into spirit, of the march and the continuous improvement of humankind.

Thalassini Douma was born in Athens and she studied at the University for Foreigners of Perugia, University of Urbino and the Roberto Rossellini Institute in Rome. As a photojournalist, since 1991, she has covered crises in war zones and their impact on daily life on numerous assignments from the war in former Yugoslavia, to the Middle East, Pakistan and Afghanistan. Her work has appeared in major international publications including The Observer, The Guardian, The Straits Times, L' Espresso, Il Manifesto, Archaeology magazine, Expressen, etc. In Wopart Lugano she presents the theme of black and white photography entitled “Lines”, part of the trilogy “Journey in the Labyrinth” which was presented in 2017 at Technohoros art gallery and at the Archaeological Museum of Patras. As art historian, Lorenzo Canova, says, in Lines cycle “the metallic external trimmings, beside light and crystals, compose a highlight and reflection weaving effect. In a further expansion of the perspective that shuts and opens by an endless game of foreshortening and flights that occupies the whole visible level, through its unsteady geometry, and insufficient spatiality”.

Christos Giannakos is the manager of the xotaris culture foundation in Archanes of Crete. The Foundation collects and exhibits engravings by Greek and foreign artists, it publishes art books and it participates in many international art fairs in Europe and Asia, maintaining a stable collaboration with foreign artists and especially with the Italian association ex libris. In Wopart Lugano 2018, Christos Giannakos presents art books - which he has curated and edited on his own - composed of unique engravings of foreign artists inspired by Greek mythology.