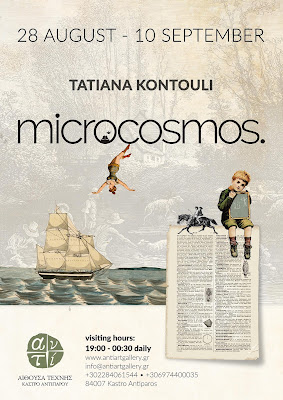 Opening tomorrow for Tatiana's Kontouli Αrt Exhibition in the island of Antiparos, Greece. They are little tales that are reborn and come to light through the pages of old books. Their heroes – people next door, familiar faces, neighbours – hail either from other times, odd and dark, or from luminous, everyday life. Their boxes conceal within them not only the obvious, but also the unexpected. They are paper creations – fragile, yes, ephemeral, no – that wink at the viewer, eliciting a smile. They are a living microcosm.  Tatiana Kontouli began to create these little stories back in 2010, shortly after relocating permanently to Antiparos – a necessary balance first had to be struck in order for this microcosm to come to life and acquire a heart and soul. The inspiration derives from the island itself, the sea, nature, feelings of freedom, tranquillity and gratitude. Her work nods at both younger and older viewers, accompanying them on travels to times of innocence, carefree childhood days, and also a love for bygone arts and old scents.  In this, her debut solo exhibition, Tatiana presents some of the themes upon which her work to date has been based. She takes viewers on a journey from the city to the island, forests and farms, nature scenes, spectacles and presentations of the past, amusement parks, heroes and acrobats, strange tales and little children from other times. All of these coexist in harmony, infused with bittersweet sentiments, patiently awaiting to be revealed.
Email ThisBlogThis!Share to TwitterShare to FacebookShare to Pinterest
Labels: Antiparos, ENGLISH, Εγκαίνια, Εκθέσεις, Τέχνη
Newer Post Older Post Home