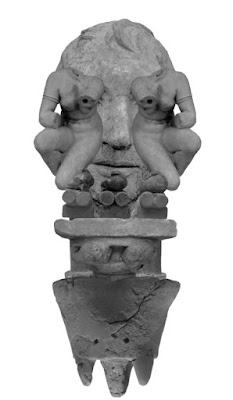 HOPE is a contemporary Greek artist that has formed his personal idiom outside the customary art education, finding his starting point as a street artist. Even in the initial expressions of his artistic language, antiquity constituted a significant element of his manifestation. In his recent creations HOPE remains loyal to the two-dimensional large-scale assemblages, that already characterised his work, and, at the same time, he takes interest on clay, a material that seems to progressively form a significant role in his visual expression. The manual processing of this creative direction along with the adopted forms, spontaneously result in apparent correlations with the archaeological past. Nevertheless, these works always bear visual components that negate the values of symmetry, perfection, and aesthetic integrity. In this exhibition, that takes place at the Andros Archaeological Museum, with the support of Outset Contemporary Art Fund (Greece), the artist will develop a range of materials and visual expressions that will be dispersed all over the museum. Collages, three-dimensional assemblages, pottery, performance on the opening day and its projection at video room of the museum, will find their place among the original archaeological finds, as well as in the building shell of this significant architectural structure. HOPE attempts to become a body within a body. His visual material acts as a symbolic language or manifesto that helps us understand how to communicate with the creations of the past. Space is created and shaped in relation to other bodies, but first and foremost by our own body.

"Who cares about antiquity nowadays? What do the findings of the past mean for the citizen of the 21st century? Do the museums still  function  as    salons  de  curiosites  where  the  travellers  of  Cyclades  seek  in  the  mass  of  the  exhibits  for  the  peculiar  artefacts  or  the  masterpieces of the past? Does for the Greek visitor remain simply a cover of over-replenishment of Modern Greek  cachexia ?   How may one satisfy-if is it even possible to be satisfied- this constantly evolving atavistic need to see through the archaeologists’  narratives within the museums? Do the archaeologists have the answers to all this existential questions about the museums they  manage?  Obviously  not.  That’s  why  we  displace  to  modern  art  our  anguish  about  the  influence  of  the  museumification  of  the  past  on  today’s  constantly  changing  momentum.  Several  artists  with  entirely  different  starting  points  were  invited  to  be  inspired  by  the  antiquities, to retell their stories, and ultimately to decide through their creation for the usefulness of the monumental heritage in 21st  century society.  Five  museums  in  the  Cyclades  participate  in  this  creative  process:  Kouphonisi,  Melos,  Crispi  Tower  and  Sangri  in  Naxos,  and  the  Andros Archaeological Museum. Inhabitants and visitors will have the chance to participate in this experiment", writes the Ephor of Cyclades Mr. Dimitris Athanasoulis.