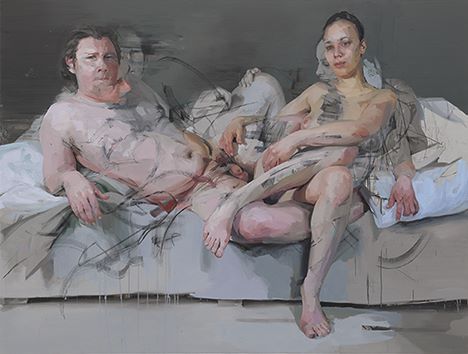 Jenny Saville is one of the most interesting, complex, ambitious and instinctive figurative painters working anywhere in the world today. Since her graduation from Glasgow School of Art in 1992, when she erupted into public consciousness with her degree show featuring a series of monumental female nudes, and continuing through to her more recent paintings of multiple figures, Saville has made works of extraordinary power that extend the subject matter of painting and test the possibilities of the medium as much as they powerfully articulate the experience of being in the world today.

This focused show at the George Economou Collection will present an overview of Saville’s work from 1993 to 2015. It includes the important early work Cindy, 1993, which introduces Saville’s concern with corporeality, anticipating her ongoing engagement with the manipulation of the body and the construction of a gendered identity. These concerns, informed at the time by Saville’s experience of watching a cosmetic surgeon at work, were both to extend the range of her subject matter and to profoundly influence her painting technique. The exhibition includes two further important examples of her early production, Ruben’s Flap, 1998-99 and Matrix from 1999.

The show also includes a group of paintings made between 2004 and 2014 that focus on the head. Saville has spoken of how addressing the same subject repeatedly gave her the freedom to test and expand new hybrid combinations of figuration and abstraction. It allowed Saville to take her handling of the paint in a new direction, moving from specificity to sensations and ideas with universal resonance. But these portraits also emphasise the fugitive nature of identity. Their visceral physicality achieves what Saville has called a “blank intensity”, making them read less as attempts to capture the essence of particular people than as detonations of sensation.

While Saville has maintained her focus on the body as subject matter, in a group of three works made between 2011 to 2015 she turns from single to multiple figures, embarking on a still more thorough merging of abstract and figurative elements. The multiple figures are themselves multiplied, as the transparency of drawing allows Saville to figure multiple realities simultaneously, demonstrating the increasing complexity of her technique as well as her conceptual vision. The layering of forms introduces a temporality into the work, while rendering indistinct the individual figure and mixing up male and female body parts, so that gender identity – and, indeed, any solid sense of self – unravels and becomes fluid.

At a time when Facebook currently offers 71 gender-identity options, and Tinder 37, Saville’s ambitious evolution of a radical visual language for the fluidity of identity could not appear more contemporary. But in fact, these concerns connect directly to Ovid’s Metamorphoses – that great handbook of change, which deals so explicitly with the ambiguity of gender and the instability of the self. Drawing upon an older Hellenistic tradition of metamorphic myths, the mythical setting for many of the stories recounted by Ovid was Sicily, a country settled by the Greeks and seen as a crucible for the Roman Empire and one of the foundations of Western culture. Saville herself was to spend time living and working in Palermo between 2003 and 2009, where she came to appreciate the hybrid formation of culture through the layering of time in successive waves of immigration.

Among her other influences are the art of Michelangelo and the archaic Greek and classical sculpture she encountered primarily at the British Museum and the Archaeological Museum in Athens. Especially the fragments of ancient sculpture, which in their cool and pristine detachment retain a power of form and suggestion unmatched in the history of art, have provided a formal and imaginative inspiration for Saville’s work. Saville is also fascinated by contemporary Greece, a country where the simultaneity of different orders of reality and experience is perhaps unmatched anywhere in the modern world. It is through her engagement with Greece and Greek civilization that Saville connects with what it means to be human, and it is through her engagement with its art that she returns painting to its origin in order to make it new.

The exhibition is curated by Simon Groom, Director of the Scottish National Gallery of Modern Art with Skarlet Smatana, Director of the GEC in close collaboration with the artist. A publication with new essays by Groom, Cambridge Professor of Classics Mary Beard, and British architectural designer John Pawson, will accompany the exhibition.

Simon Groom is Director of the Scottish National Gallery of Modern Art.
He graduated with a degree in English Literature from Edinburgh University in 1989 before spending a year living and working in Japan and three years in Italy, where he taught English literature and critical theory at Florence University. In 1994, he returned to London to complete an MA and then a PhD in Art History at the Courtauld Institute of Art (completed in 1999). For three years he worked as the curator at Kettle’s Yard, Cambridge, where he curated, among other shows, the first UK retrospective of the Japanese group Mono-ha. In 2003, he was appointed Head of Exhibitions at Tate Liverpool, where he curated numerous exhibitions of modern and contemporary international art, including The Real Thing: Contemporary Art from China in 2007, as well as developing Tate’s acquisition strategy in Asia. In November 2007 he was appointed Director of the Scottish National Gallery of Modern Art, Edinburgh. In that time he has sought to establish and develop the profile of the Gallery in its promotion of modern and contemporary art, and to build and promote Scotland’s reputation as a leading international centre for contemporary art. In 2014, the Gallery led on the conception, realisation and delivery of GENERATION, an exhibition showcasing 25 years of contemporary art in Scotland, featuring the work of over 100 artists in 62 venues across the country, which attracted over 1.3 million visitors. He has played an active role in many institutions, inter alia as Governor of Glasgow School of Art, a board member of the Young People’s Committee of the Royal Society of Edinburgh, a member of the National Cultural Diplomacy Group at the British Council, and a member of the Advisory Board of Art UK.

The exhibition will be on view from 18 June 2018 until April 2019 at the George Economou Collection Space, 80 Kifissias Ave, 15125 Marousi, Athens, Greece. Our opening hours are Monday to Friday from 10 am to 6 pm.