The Black Mountain College Museum + Arts Center in downtown Asheville is pleased to announce the exhibition Harry Seidler: Architecture, Art and Collaborative Design, from June 14 – August 21, 2013. This retrospective exhibition illuminates Seidler’s legacy as Australia’s most important modernist architect. Harry Seidler studied with Josef Albers at Black Mountain College in the mid-1940s and became a major proponent of Bauhaus principles of design in his architectural practice. The opening reception will take place from 5:30 – 7:30 pm on Friday, June 14th. Admission is free for members and students, $3 for non-members. 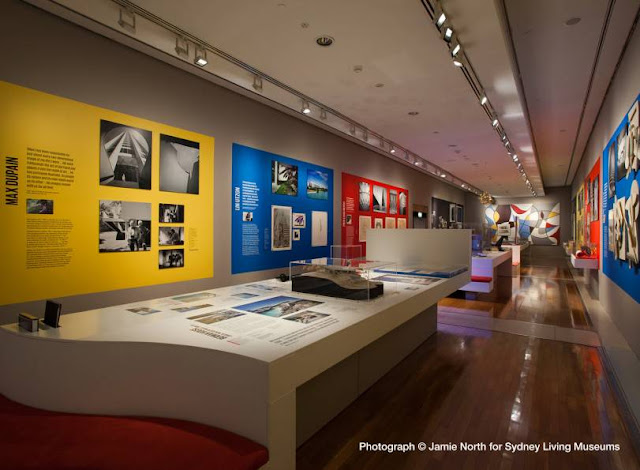 Architecture, Art and Collaborative Design is a traveling exhibition celebrating the ninetieth anniversary of the birth of Harry Seidler, the leading Australian architect of the twentieth century. The exhibition traces Austrian-born Seidler’s key role in bringing Bauhaus principles to Australia and identifies his distinctive place and hand within and beyond modernist design methodology. The fifteen featured projects—five houses and five towers in Sydney, and five major commissions beyond Sydney—focus on Seidler’s lifelong creative collaborations, a pursuit he directly inherited from Bauhaus founder Walter Gropius, with progressive artistic visionaries: architects Marcel Breuer and Oscar Niemeyer, engineer Pier Luigi Nervi, photographer Max Dupain, and artists Josef Albers, Alexander Calder, Norman Carlberg, Sol LeWitt, Charles Perry, Frank Stella, and Lin Utzon.   The exhibition was developed by curator Vladimir Belogolovsky of Intercontinental Curatorial Project in New York with Penelope Seidler and Harry Seidler & Associates in Sydney and sponsored by Seidler Architectural Foundation. Seidler’s work is presented through architectural models, sculpture maquettes, photographs, films, correspondence, books, scrapbooks, periodicals, drawings, and original sketches—provided by the architect’s family, Historic Houses Trust of New South Wales, The Josef & Anni Albers Foundation, The Marcel Breuer Digital Archive at Syracuse University, and the private archives of artists Norman Carlberg, Charles Perry, and Lin Utzon.  Harry Seidler: Lifework  a book by curator Vladimir Belogolovsky with additional texts by Chris Abel, Norman Foster, Kenneth Frampton, and Oscar Niemeyer will be designed by Massimo Vignelli and published by Rizzoli in March 2014.  A statement from exhibition curator Vladimir Belogolovsky: “I would draw attention to two reasons why Seidler is important and why he will always be important. First, it is his love for architecture, his position on following his convictions to which he was always true and a mission to make the world a better place where architecture is a big part of it. He was a real crusader and not just for his own work but for what he believed – whether voicing his support for JørnUtzon’s Opera House in Sydney or protesting against unfitting addition to Marcel Breuer’s Whitney Museum in New York by Michael Graves. And second, I think is really important, particularly today when so many architects are entrenched with their ambitions compromised and scaled down. It is the importance of inspiration. Seidler’s vision was grand and he drew his inspiration from a multitude of sources – art, geometry, history, and so on. I would particularly stress the importance of art as an endless source of creative inspiration for architecture.”

New York-based INTERCONTINENTAL CURATORIAL PROJECT promotes the role of architecture as the vital part of contemporary culture and life. The Project collaborates with museums, universities, publishers, architects, and curators on organizing, curating, and designing exhibitions worldwide. The company’s founder, curator Vladimir Belogolovsky is the American correspondent for the Russian architectural journal TATLINand author of books Felix Novikov, Green House, andSoviet Modernism: 1955-1985. He has curated exhibitions for Russian Pavilion at the 11th Architecture Venice Biennale;architect ÁngelFernández Alba’s retrospective at the Royal Botanical Gardens in Madrid, Spain; the GreenHouse exhibition at the Manezh Central Exhibition Hall at Moscow’s Zodchestvo-2009 International Architectural Festival, as well as traveling exhibitions Colombia: Transformed and Harry Seidler: Architecture, Art and Collaborative Design among others. He has presented leading Russian architects at the Center for Architecture in New York and has given lectures at universities and architectural centers in Australia, Austria, China, Bulgaria, Estonia, Hong Kong, Latvia, Malaysia, New Zealand, Spain, Russia, and the United States.He is currently working on a book, Harry Seidler: Lifework (Rizzoli with Massimo Vignelli) to be released in 2014.