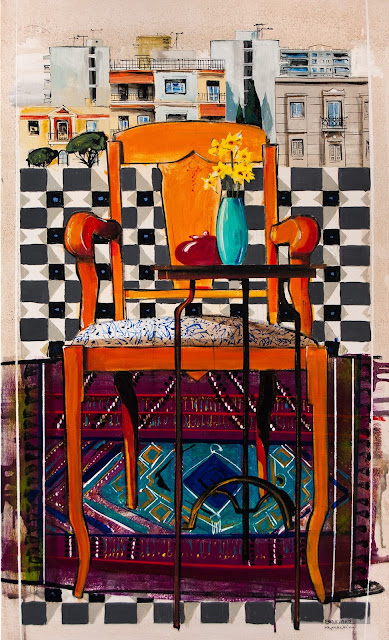 Cube Gallery inaugurates its collaboration with the artist Vassilis Karakatsanis, hosting his solo exhibition, titled “Cartpets 2”. This exhibition is about the artworks that has been created from 2016 to 2017 and they are part and continuation of the unity under the general title "Carpets". The first paintings, "Carpets 1", were presented in 1991 and since then, they have been enriched, adapted and presented in art galleries in Greece and abroad. The works concern the personal approach of the artist to the “odd” family Abd Al Aziz which, having Beirut as its seat and being active in various cities (especially in the Mediterranean), trades “magic” carpets to people who have the courage to travel on them, living out either the illusion or the reality. The members of the family are dispersed in various cities, thus maintaining the independence of their personal lives, each one influencing the buyers, with their dynamics or by employing other ways, those of seduction or magic. In their possession there are carpets with prophetic depots and magical qualities. "Flying Carriers", which make you decipher to them, as their "role" is to transport us to a world of peace and security from evil. His artistic approach today is nothing other but the “horizontal cross-section” of the majority of his approaches, all the years of his work, with its final “key” being the fabric, a material which prevailed in his artistic endeavour, most prominently as an element of the surrounding space but also with an evident experiential relationship.

Vassilis Karakatsanis (b.1957, Athens/Greece) lives and works in Athens. He has exhibited his work (solo exhibitions) in Greece, Cyprus, Spain, Italy, Indonesia, Ecuador, Turkey, Denmark and Germany. His thematic choices and his personal artistic vocabulary are informed by his experience and observation of the surrounding world. He organizes his exhibitions by using a theatrical attitude: he transforms the mundane everyday objects into structural elements of his work. He uses a clean and rich colour palette and vivid contrasts. He creates installations by using elements from the existing three dimensional spaces and by transforming them into art forms. He researches with sensitivity the limits between reality and illusion.