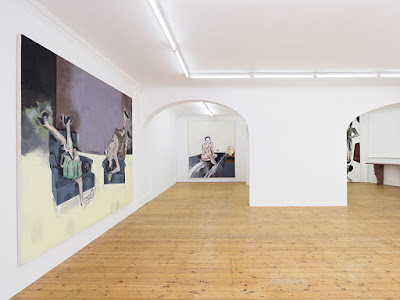 Apostolos Georgiou, ‘From My Heart’  Rodeo Gallery till 16 June
A man in a jacket in front of a wall takes a paper out of the inside of his jacket and covers his face as if he is either crying or is embarrassed. The paper has a black heart drawn on it.  In an undefined space, hard to say whether interior or exterior, two people intertwined on a chair, a woman is feeding a man with a spoon. On the next chair a woman is wearing black and the man is facing down, possibly dead.  On a rectangular surface, what could be a mattress, a woman sits with her fist punching. A long rifle lies next to her.  In a sophisticated interior, possibly the salon of an established family, or so the furniture suggests, a man is serving coffee with a glass of water on a silver tray. Apart from him, the room is empty.  In front of a door, inside or outside of a house, a man is looking down to a painting of a couple driving a red convertible.  In a living room, a couple watches themselves stabbing each other in turns, modern sofa in the background.  On a bed a man covers his face, an empty white pillow next to his. A scene above the bed of a woman in black kneeling towards another man. He either dreams or remembers.  Empty living room, two arm chairs in the centre, and one person on each of them in an upside-down pose.  In front of a wooden podium a woman stands proudly, like the statue of an Eastern Block leader from the past. In front of her lies her own body, she seems to be dead.  On a bed in a bare room sits a naked man staring, a bed side lamp is on by his side.     This is the third solo exhibition at the gallery by Apostolos Georgiou (b.1952, Greece). Previous solo and group exhibitions include: Situations, You Space and Extra Space, Shenzhen (2018); Documenta 14, Athens and Kassel (2017); Shut Up and Paint, National Gallery of Victoria, Melbourne (2016); Cher(e)s Ami(e)s, Centre Pompidou, Paris (2016); The Same Old Fucking Story, Rodeo, London (2016); Tightrope Walk: Painted Images After Abstraction, White Cube, London (2015);  Unrealism, The Moore Building, Miami (2015); Burning Down the House, 10th Gwangju Biennale, Gwangju (2014); This is Not my Beautiful House, Kunsthalle Athena, Athens (2014); Everyday a Stage, Rodeo, Istanbul (2014); System of Objects, DESTE Foundation, Athens (2013); Apostolos Georgiou. Painting, EMST, Athens (2011). Georgiou’s work is included in the following public collections: Centre Pompidou, Paris; Nouveau Musée National de Monaco, Monaco; National Gallery of Victoria, Melbourne; National Museum of Contemporary Art, Athens.


August Sander, ‘Men Without Masks’ Hauser & Wirth 18 May – 28 July  In 1910, a young man from a mining town east of Cologne set out on a prodigious project. His name was August Sander and his aim was to document contemporary German society in all its diversity, through photographic portraits of its people. Featuring more than 80 large-scale black and white photographs taken between 1910–30, Hauser & Wirth is the temporary home of this peculiar rabble: two boxers stand beside a jockey – alongside a nun, spectacled students. There are aviators, farm workers, dwarves and actors; each is preserved by Sander’s exacting lens. Included in the exhibition are an early set of 12 portraits of farm labourers from the Westerwald. The series served as the foundation for a larger project called ‘People of the 20th Century’, in which subjects were photographed and, in Sander’s words, classified ‘according to their essential archetype, with all the characteristics of mankind in general.’While this has connotations of the crude essentialism of fascism, Sander’s work sought to disrupt this logic from within. His book of portraits, Face of Our Time (1929) was subsequently destroyed by the Nazi regime.  Should you seek individuality within the society cliché, these pictures constitute a unique ahead start.


Hayward Gallery , South Bank Until Sunday August 19 2018 Lee Bul
Lee Bul transforms Hayward Gallery into a spectacular dream-like landscape featuring monstrous bodies, futuristic cyborgs, glittering mirrored environments and an exquisitely surreal monumental foil Zeppelin.  Bringing together more than 100 works from the late 1980s to the present day, this exhibition explores the full range of Lee Bul’s pioneering and thought-provoking practice, from provocative early performances to recent large-scale installations that attempt to get our body and our brain ‘working at the same time, together’.

National Gallery Until 29 July 2018 One exhibition featuring Monet’s paintings and nothing else? That’s a rare thing. The last time the UK hosted a Monet exhibition like this was almost 20 years ago. But 'Monet & Architecture' is not just rare, it’s never been done before. Sainsbury Wing There’s never been a single exhibition looking at Monet’s career through the buildings he painted: in Normandy, in Rouen, in Paris, London, and Venice. From buildings in villages and by the coast, to some of Europe’s most famous monuments, Monet painted the architecture of his time – modern, historic, simple and grand.  This is a new way of looking at Monet’s work. It shows how he used architecture to create his compositions, both in his most famous paintings and lesser-known works. Book now to see more than 75 paintings by Monet, together for the very first time.

Rodin and the Art of Ancient Greece British Museum , Bloomsbury Until Sunday July 29 2018
In 1881 the French sculptor Auguste Rodin visited London for the first time. On a trip to the British Museum, he saw the Parthenon sculptures and was instantly captivated by the beauty of these ancient Greek masterpieces.  Like many archaeological ruins, the Parthenon sculptures had been broken and weathered over centuries, but Rodin took inspiration from the powerful expression that they conveyed through the body alone. He even removed the heads and limbs from his own figures to make them closer to the broken relics of the past. By doing so, he created a new genre of contemporary art – the headless, limbless torso.  A hundred years after his death, see a selection of Rodin’s works – including his iconic sculptures The Thinker and The Kiss – in a new light. This major exhibition will feature original plaster, bronze and marble examples of many of Rodin’s sculptures on loan from the Musée Rodin in Paris. For the first time, they will be shown alongside some of the Parthenon sculptures that the artist so admired, as well as selected objects from his own collection of antiquities.  Experience the magnificent sculpture of a modern master, and explore how the ancient world shaped his artistic vision.