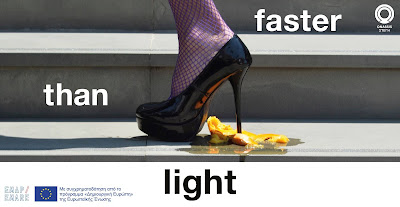 "We built a queer spaceship. We are returning home."  Kentaro Kumanomido and Thomas Anthony Owen, first artists in residence of the EMAP/EMARE platform at the Onassis Cultural Centre-Athens, invite us on a performative journey along the margins of consciousness. #fasterthanlight is an intermedia project focused on the intersections of technology, identity, consciousness, trauma, and survival. We'll pick up shards of fragmented code belonging to a mythical operating system whose name has been long-forgotten. We'll brew a pot of something strange, in order to entice, through scent, this memory of our remembering. Lately the wind has been heard whispering a string of letters sounding something like “freeeeedoommmm”.