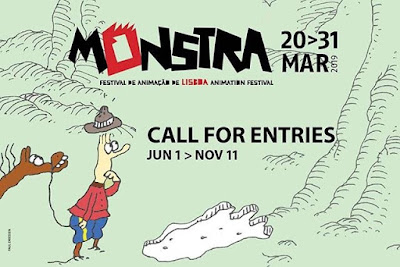 MONSTRA Festival in Lisbon seeks experimental animation independently of technique. The main aim of the festival is the presentation and promotion of the world’s best animation.  Each year MONSTRA presents a wide selection of films in competition in the following categories:


The films must contain an animated sequence corresponding to a minimum of 60 percent of the total running time. Any animation technique is accepted.  You can submit your films to MONSTRA's international competition until Nov. 11. Directors with films selected for competition are invited to the festival to present their film.  Prizes will be announced at MONSTRA's website in February. Regulations, entry forms and authorization forms can be found online HERE.
Email ThisBlogThis!Share to TwitterShare to FacebookShare to Pinterest
Labels: Animation & Comics, Call for entries & Competitions, ENGLISH
Newer Post Older Post Home