Ever Closer to the Stars/ Sunday Narratives & hd.kepler in Athens 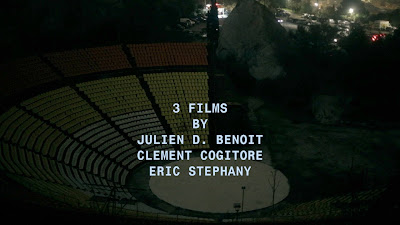 Τhe screening program Sunday Narratives / Κυριακάτικες Αφηγήσεις and the art & research platform hd kepler present on Sunday, March 18 at 6 pm three short films by the French artists: Julien D. Benoît, Clément Cogitore & Éric Stephany at Ααβόρα cinema, 180 Ippokratous Street, 11472 Athens, Greece. The screenings will be followed with a short talk with Eric Stéphany and the audience.  The film The resonant interval by Clément Cogitore was presented in Palais de Tokyo in 2016. Cogitore was nominated for Cesar, Lumière, Camera d’Or - Cannes international film festival award among others. Éric Stéphany film ANTICIPATION was screened in Centre Georges Pompidou in Paris in the frame of Gondwana Series: interventions by the Clark House Initiative. Julien D. Benoit is an emerging artist, In awe is his first film and was presented FID - 28eme International Cinema Festival of Marseille.  The films are in English as well as the conversation with the artist Éric Stephany.

Short film description:
In awe takes place on a Christmas Eve in New York City, Kobas, a young antisocial drifter torn between the perils of a virtual world and the evidence of his solitude, becomes infatuated with a golden boy that he comes across in a cinema. Julien D. Benoit’s film is astounding in the way it renders everyday meanderings which are made of dreams and violence. Along deserted streets, against the blocks of snow, Kobas’s longings are thrown into exhaustion, thus making the film unveil its other reality.

The resonant interval is based on two unexplained natutal phenomena: the supposed perception of sounds emitted by the Northern Lights, and the appearance of a mysterious luminous object in Alaska. In both cases, superstitions and the Inuit and Saami belief systems have disturbed the quest for scientific explanations. Through the images and stories produced by these phenomena, a tale is set between a personal and a collective mythology, between scientific protocol and ritual celebration, between fiction and documentary.

The film is titled ANTICIPATION; as the feeling of anticipation Eric Stephany was following before starting his tour of Indian observatories. Anticipation as the aim followed by the Indian precursors in this very early 18th century building those syncretic objects, pure mix of the old Arab astronomical knowledge and the deep indu beliefs. Anticipation one can feel watching animality or listening to the incredible surrounding sound immersing the viewer into an unknown time of contemplation.

Artist bios:
Julien D. Benoit (b. 1988, Montelimar) lives and works in Paris. He has completed his studies in the Fine Arts School of Lyon. He is a film director and a photographer. Ιn Awe is his first short fiction film and was projected at FID – 28th International cinema festival in Marseille, France and Kurzfilmtage Winterthur recommendations program Winterhur in Swizterland.

Clément Cogitore (b. 1983, Colmar) lives and works between Paris and Strasbourg. He studied at the École Supérieure des Arts Décoratifs of Strasbourg and at the Fresnoy-National Studio of Contemporary Arts. His work explores the question of ritual, collective memory, figuration of the sacred as well as a particular idea of the permeability of the worlds. His films have been selected for numerous international festivals and won several awards (BAL, Ricard Foundation, FNAGP, Villa Medicis). His work was presented in various museum (Pompidou, Haus der Kultur der Welt, Museum of fine arts in Boston and MoMA).

Curatorial concept: hd.kepler. uses astral symbols to comment on socio-political issues such as alterity, mediation, cultural translation, coexistence in an increasingly challenging environment. Ever Closer to the Stars is a series of interstellar walks based on cosmological journeys, a dominant form of narration in literature, poetry and philosophy in 17th and 18th century. Fiction and tale are tools that allow us not only to examine the world as scientific tools do but to think and imagine the world in a different way, overcoming realistic limitations.

Organizers bios:
The curatorial team of Sunday Narratives, composed of the artist Theo Prodromidis, and Christina Kalli, independent curator, aims is to present selected narratives about the social conditions that shape global reality, through the work of independent creators.

hd.kepler. is a platform dedicated to art and research, created by the curator Eleni Riga and the artist Florent Frizet. hd.kepler. is meant to function as an exoplanete. hd.kepler. is always in research of a habitable place to establish, share and exchange artistic and curatorial practices. hd.kepler. is interested in developing its activity between France and Greece, acknowledging opportunities could be found elsewhere.

Trailer Credits:
Directed and Edited by Theo Prodromidis
Cinematography by Alexandra Masmanidi
Trailer includes musical excerpts from Ever Closer to the Stars (Prelude) by Florent Hadjinazarian in collaboration with Florent Frizet, live recorded in September 2017 at the French Institute of Athens, curated by hd.kepler. and an excerpt from the film The resonant interval (2016) by Clément Cogitore.
Email ThisBlogThis!Share to TwitterShare to FacebookShare to Pinterest
Labels: Athens, Cinema, ENGLISH, Festivals & Biennales, Τέχνη
Newer Post Older Post Home