Be there! Back to basics: Uncanny II 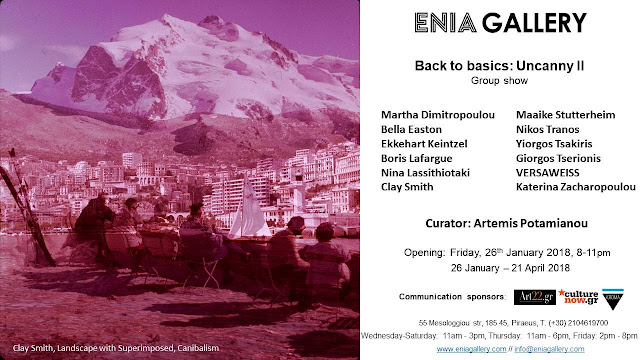 ΕΝΙΑ Gallery presents on Friday, 26 January 2018 the second part of the group exhibition “Back to basics: Uncanny II”, curated by Artemis Potamianou.  The exhibition Back to the basics: Uncanny ΙΙ builds on the first part of the show, held at the ΕΝΙΑ Gallery in December 2016, by exploring the different approaches to the concept of the uncanny as it was defined by Sigmund Freud.  The uncanny, a concept which Freud explores in his book Art and literature, first published in the autumn of 1919, has been a source of inspiration in the creative process of many artists. The complexity of the Uncanny lies in that while it conveys the notion of the foreign and the uncertain it is directly linked to a suppressed familiar feeling of an experience.  Analysing the relation between the German word heimlich (familiar, not absurd) and its logical opposite, unheimlich, through their etymology in various languages, Freud concludes that the semantic interpretation of heimlich verges towards ambivalence until it ends up coinciding with its opposite—unheimlich.  Through a collection of experiences and situations which trigger a sense of unfamiliarity, Freud demonstrates that the uncanny belongs to the category of the familiar scary-paradox which, through the process of suppression, ends up becoming unfamiliar. This transition from familiarity to alienation is fundamental to the creation of an uncanny condition.  The second version of the exhibition Back to the basics: Uncanny explores different versions and approaches to the interpretation of the notion of the uncanny in the work of thirteen contemporary artists.

Admission to the exhibition is free