NAOUSSA, CITY OF WINE 2017 Celebrating Xinomavro at its heartland 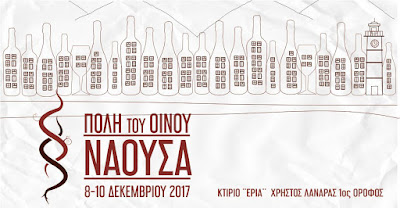 “NAOUSSA, CITY OF WINE” will be welcoming wine enthusiasts to the annual event dedicated to the famous Xinomavro that will be held in Naoussa, the heartland of the variety, from 8 to 10 December 2017.

As 2017 coincides with the 30-year-anniversary since the declaration of Naoussa as International City of Vine and Wine by the OIV in Rome (1987), the much-awaited festival will include a celebratory agenda of wine tastings and workshops in an effort to showcase the sheer personality of Xinomavro and the intriguing expressions and styles met in Naoussa.

The key word will be “content”. Content as to the stunning wines that will be poured during thematic and –in some cases- rare tastings; content as to thought-provoking presentations and workshops that will highlighting the challenges on hand for Naoussa and Greek wine in general. From “Naoussa of our dreams” to “Social Media: is it all about a good photo?”.

What is fascinating about this festival is that together with the host –Naoussa Vine growers and Winemakers Association- the whole city of Naoussa embraces a celebratory mood. Special menus and offers are available at all local restaurants and wine bars, while local hotels will be welcoming visitors with special rates. On the final day, Sunday 10 December, the wineries of the region will keep their doors open to wine enthusiasts, offering tours, tastings and happenings.