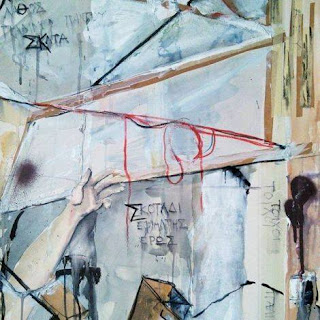 The two artists, Philippe Laferrière and Christos Alaveras, present an installation that will include earlier and new works from their career, as well as timely pieces that comment on the crisis of the home, in the wider sense of the word. This visual-spatial installation will chronicle and comment on the primordial and current relationship between man and home. The painting installation will be revealed in real time to the attending audience, followed by the unveiling of an independent, in situ work.

By juxtaposing the painting gestures and independent dynamics of the two painters, the ensemble work presented here aims at synthesis and composition, which are the fundamental materials in the building of a home, which may have to exist in unforeseen conditions. This collaboration acquires an increased importance considering the history of the country in which it takes place, and the specific venue and country the latter represents. Greece and France have historically propelled intellectual progress at the global level, and have also had been tested in the crucible of intellectual debate and confrontation.


The exhibited works represent a variety of materials, forms and dimensions (coals, pencils, inks, temperas, aquarelles, acrylics, oils, engravings, videos).
On the opening day a perfroamnce will take place by the two artists along with Antonia Pitoulidou, choreographer, the dance group The Manzins, fia so with free style and Nikos Diminakis, musician.