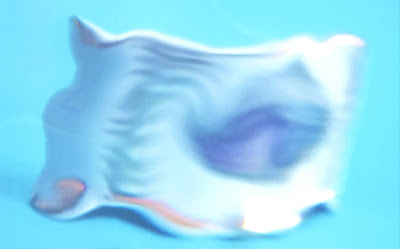 "Ornamental Torture" is the first solo exhibition in Athens by the Chilean artist Jorge Cabieses-Valdes.  Over the period of two years the artist has collected a number of small decorative porcelain items from consignment stores in Athens. Such shops, which allow individuals to submit and potentially sell personal objects on consignment, have increased in number during the recent economic crisis. The artist approaches them as museums of domestic life that offer a rare opportunity to explore private possessions. His collection of poor quality, second-hand porcelain items is the starting point for the works presented in this exhibition.  While these objects have witnessed turbulent events of possession and loss and have been saturated with the vicissitudes of the current crisis, their surfaces remain elegantly rigid and arrogantly unaltered by the circumstances. In an attempt to stir their stillness and challenge their silence, the artist forcefully provokes the mute and untroubled surfaces until they are altered. Each documented object has been submitted to visual deformations through an intervened camera lens. In the resulting video, painting, sculpture and sound pieces, the highly distorted items remain recognizable as ornamental porcelain artifacts. Tracking them back to their original form is an instinctive response of the eye, suggesting an inherent, hearty connection to such traditionally domestic objects.  A performance of Porcelanatron III will be presented during the opening. Porcelanatron III is a sound-sculpture created by the artist, interpreted by percussing printed porcelain tiles.

He has participated in Incheon Art Platform Residency Program in South Korea (2013) and HIAP Helsinki International Art Program in Finland (2011). He has obtained the FONDART funding award in 2012, 2010 and 2005, DIRAC funding program in 2005 and Presidente de la República Scholarship in 2006.

From 1994 to 2014 he was part of the Chilean experimental music project Tobias Alcayota.