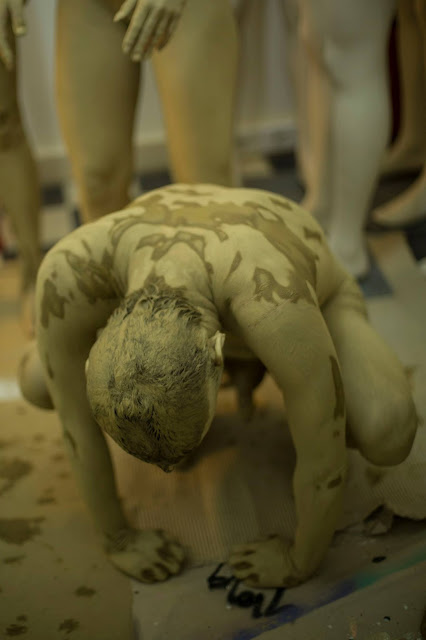 An end always marks the potentiality for new beginnings. On August 28th, the arrival point will be chaotically juxtaposed to the point of departure, to the explosive inception of Si Sedes Non Is, which occurred last April 6th. Like an ouroboros, the notorious snake which bites its tail, we will make return to Athens, in the quiet of the late summertime, to celebrate our own midnight summer’s dream. This last act, the last for now, will happen shortly after the public comeback of the KLF in Liverpool on August 23rd, and will share with it the same climate of unpredictability. What we decided to define as finissage perhaps won’t be a real conclusion, but rather, a resolution for the beginning of a recurrent narrative…

Months after disclosing the access to another realm, Lucy McKenzie’s Alchemical Door is ready to once again welcome a round of powerful energies. Returning to the alchemical squat on occasion of the end of the exhibition, artists Joana Escoval, Delia Gonzalez, Angelo Plessas, Mathilde Rosier and Socratis Socratous, accompanied by the astral presence of Christodoulos Panayiotou and Micki Pellerano, will spontaneously perform, or not, during the closing night, fully aligning to the anarchic state of mind of the exhibition. Introducing it all, reactivating Prem Sahib’s altar and transforming it from sculptural element to stage, there will be a performance by Hope Gigantopolis with the participation of: Georgia Kalafati , a.k.a. Sugahspank and Chris Scott Moskovich. The garment by Gareth Pugh will also be freed, and once again be worn. Some of the traces initially left in the squat will be erased, disappearing forever, whereas new writings may join the drawings covering the walls. Works will move, swirl and twirl around, paintings will be turned. Goshka Macuga’s thinkers heads will maybe decide to rotate as well, and eventually face the wall. Some elements might even leave the exhibition, carried away in the arms of neurologist Francesca del Sorbo and visual scenographer Giulio Ceruti, whom will manifest themselves in Athens after a brief appearance in between Naples and Stromboli, earlier this July.

Historically associated with power, religion and mysticism, fights evoke chaos, and are instigated to established a new order. Playing with ideas of ends and beginnings, Hope will enact a ritualistic fight in between the origin and the conclusion, a combat where these concept will be metaphorically symbolised in flesh by a man being covered and uncovered in clay, stained by the artist and cleaned by a second figure, in a tight crescendo, an ascending climax which will erupt in a final, violent confrontation.

photo: Performance of Hope Gigantopolis (with the participation of: Georgia Kalafati , a.k.a. Sugahspank and Chris Scott Moskovich) by Pinelopi Gerasimou