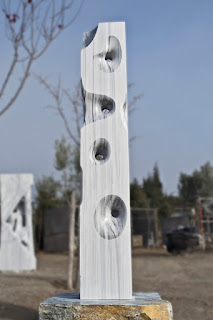 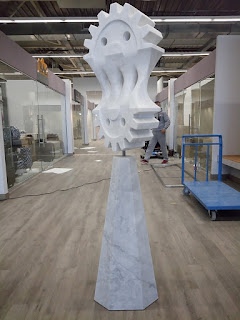 Sunday, July 23rd, 2017 - It is a gift to witness the born of talent, and a second one to witness further the development of the talent into a disciplinary artist capacity. Giorgi Spiridonov is a natural we met and partnered with 5 years ago before we even establish the Greek Marble Initiative. An excellent young stone & marble technician at a time showed early signs of artistic orientation while he attempted to study ancient Greek forms sculpting pieces that resembled but didn’t copy the exact masterpiece, embedding his own features in the forms. For instance, a theme we encounter often in his sculpture is the human figure, which usually appears with the absence of the physical body and as a supersized head.In 2013 when the Greek Marble Initiative kicked off, Giorgi Spiridonov was our first, and self-evident choice to include him in the roster of our Symposium and welcome him among our members; again he proved not only a valuable partner, but in addition an asset as he assisted other sculptors, sometimes older and more experienced than himself, to achieve a more fluent materizalization their own sculptures. 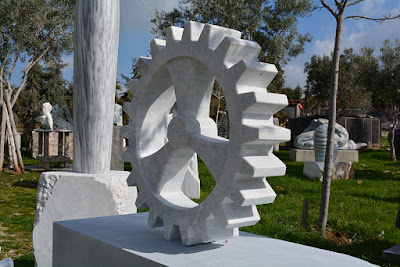 The Machine series
As the artist Giorgi Spiridonov confessed to us it is a depiction of the spiritual elements of the universe as they transform into various energies. “The machine” series depicted as various gears was the result of a process of creating an environment of elements. One can find gears in every corner or place all around the field where the symposium is taking place. Geometry gained on the vital place the abstraction left in his creations. A huge human head, straying in style into the borderline between the Easter Islands giants and the Soviet era political monuments, bearing an influence mark of Georgie Cpajak with whom the young artist has being working along for sometime as a Technical Assistant within the Greek Marble Initiative symposiums. It is a solid, vigorous, though somewhat wounded by time and elements of the Nature head, made in a quite banged stone. The archaic figure does not constitute a backward movement for Giorgos Spiridonov, but it is rather a first glimpse of his forthcoming choices. His style is semi-abstract and symbolic even in smaller pieces, though some of them utilize the human form in reinforcing the sense that reality is relative. He says that he wants his works to display both the nature of the medium and the nature of what he depicts. 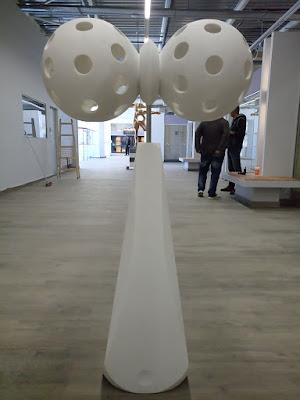 The Void series
A newer series of  the young sculptor consist of objects formed and encased within spheres, egg-shaped forms or other structures, created by a single block of marble. I will not marvel the patience and the technical skill found in this practice; I will rather discern the thought of a slaved reality being born in captivity, and the ever present to almost every contemporary sculptor in marble need to renew the properties of the material, to defy the natural state of a cold, solid rock by providing it with the experience of being run off by light. In these series there sculptures which are worked with care and constant effort so that the marble has become almost sheer and transculent. These artworks are now in show at Mouzenidis' Group Enigma Mall in Chalkidiki, Greece. An new project is up for Spiridonov but it is not within my intentions for this article to reveal it to you. Stay tuned.


Short Bio
Giorgos Spyridonov born in Russia in 1999. In his adulthood he lives and works in Greece. He has worked as a Technical Assistant to the Symposiums of the Greek Marble Initiative, to which he is also a full member from its establishment. His expertise varies in sculpting in marble, stone to steel and scrap metal into the creation of art. His works belong into private collections and many of his sculptures can be found in public places in Greece.
Email ThisBlogThis!Share to TwitterShare to FacebookShare to Pinterest
Labels: ENGLISH, Sculpture & Ceramics, Παρουσιάσεις
Newer Post Older Post Home