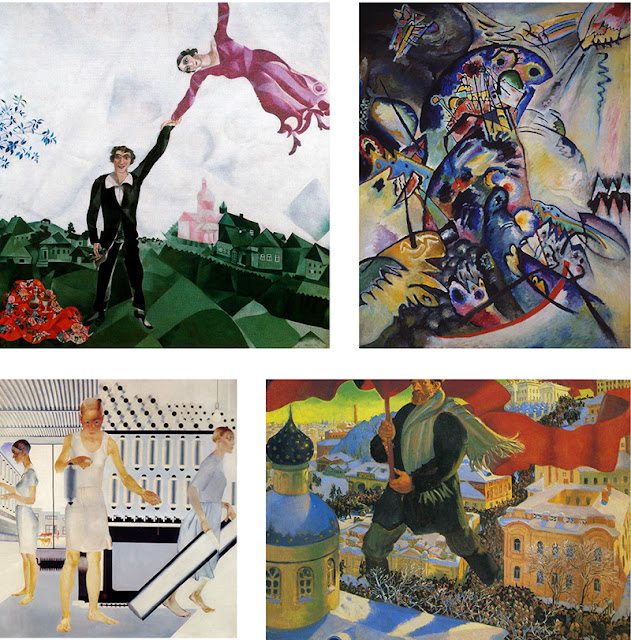 Sunday, February 12, 2017 - In order to commemorate  the  centenary  of  the  Russian  Revolution,  the  Royal  Academy of Arts (RA) is presenting the massive exhibition "Revolution:  Russian  Art  1917–1932".  This  is a landmark  exhibition  which will  focus  on  a significant period  in  Russian  history  between  1917,  the  year  of  the  October  Revolution,  and  1932, when Stalin began his violent suppression of the Avant-Garde. The exhibition feature Avant-Garde artists  such  as  Chagall,  Kandinsky,  Malevich  and Tatlin alongside  the  Socialist  Realism  of Brodsky, Deineka, Mukhina and Samokhvalov, amongst  many others. Photography,sculpture,  film,  posters  and porcelain  will be featured  alongside paintings. The show presents  this unique  period  in  the  history  of Russian  art, when  for  fifteen  years,  barriers  were  opened  and  the  possibilities  for  building  a  new proletarian art for the new Soviet State were extensive. The exhibition  is  curated by Ann  Dumas, Curator,  Royal  Academy  of  Arts  together  with John  Milner, Professor of the History of Russian Art at the Courtauld Institute of Art and Dr. Natalia Murray, Curator and Lecturer in Russian Art at the Courtauld Institute of Art, London. With over 200 works, the exhibition includes loans from the State Russian Museum in St. Petersburg and  the  State Tretyakov Gallery  in  Moscow as  well  as  some  of  the  most significant  international private collections. Many of the works have never been seen in the UK before. A  century  after  the  1917  October  Revolution,  this  turning  point  in  Russian  history  remains  a  major event  in  modern  consciousness.Although  there  have  been  a  number  of  exhibitions  of  20thcenturyRussian  art,  these  have  focused  on  either  the Avant-garde  or  Socialist  Realism's  separate entities. Revolution: Russian Art 1917–1932 takes as its starting point the major exhibition of 1932, which  was  presented  in  33  rooms  at  the  State  Russian  Museum  in Leningrad and orchestrated  by prominent  art critic  and  curator Nikolai Punin.  The  1932  exhibition presented a  wide  spectrum  of Russian art from those first fifteen years after the revolution.The Royal Academy's exhibition follows that  example  with  a  wide  sweep  of  works that,for  the first time in the  UK,combine  and  contrast the diverse array of art that flourished during this complex post-Revolutionary period.

The  exhibition is arranged around  broad  thematic  sections,each  of  which  will  explore  the  complex interaction  between  art  and  politics  in  the  turbulent  yet  dynamic  period  of  modern  Russian  history.Salute  the  Leader will examine Lenin’s rise to power;his  cult  status  after  his  death  followed  by  the advent  of  Stalin. Man  and  Machine will  focus  on proletarian  worker  heroes–both  women  and  men whose  physical  effort  promoted  the  success of  industry  and  technology,powerfully  recorded in painting, photography and film.Brave New Worldsets the scene for the new cultural world and Fate of the Peasantswill  look  at  the  impact  of  collective  farming  on  traditional  rural  life.Eternal  Russia will show  how images  of  old  Russia  persisted  as  signs  of  national  identity  even  in  revolutionary  times.New City, New Society will concent rate on the new citylife-styles, the diversity of social types, some wealthy  and  some  poor,under Lenin’s New Economic Policy in  the  1920s  and Stalin’s Utopia will feature Stalin’s grandiose public projects and the dark reality of his utopian vision of progress.

Highlights will include  a  gallery  dedicated  to  over  30  paintings  by  Malevich.  These works are being seen together for the first time since 1932 in an exact reconstruction of the original hang designed by the artist for the Leningrad exhibition. A room is also dedicated to the work of Kuzma Petrov-Vodkin. Woven  throughout the  galleries are found original films,  photographs  and  documents,many of which have never been exhibited before. Among  the outstanding paintings  will  be  Marc  Chagall’s Promenade,  1917–18, Wassily Kandinsky’s BlueCrest,  1917, Boris Mikailovich Kustodiev’s Bolshevik, 1920, Kuzma Petrov-Vodkin’s Fantasy, 1925, Alexander Deineka’s Textile Workers,  1927, and Kazimir Malevich’s Peasants,c.1930.