London Calling | Frieze 2016 happily ever after 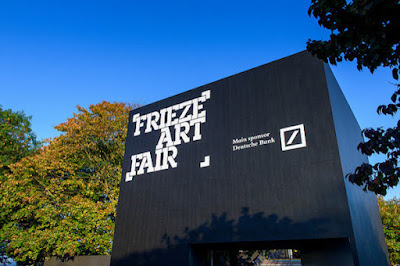 Sunday, October 16, 2016 - The 14th edition of Frieze London closed on Sunday 9th October, having seen major acquisitions by international institutions and significant sales to private collectors. The fair, which brought together over 160 galleries from 30 countries, attracted a record number of collectors with a 30% increase in attendance on preview day and increased collector numbers throughout the week. Frieze London is supported for the 13th consecutive year by main sponsor Deutsche Bank, continuing a shared commitment to discovery and artistic excellence. Building on Frieze’s enduring institutional relationships, this year saw a 20% increase in museum groups across Frieze fairs. In 2016, Frieze also partnered with two major acquisition funds for national museums: the Frieze Tate Fund, now supported by WME | IMG, and the launch of the Contemporary Art Society’s Collections Fund at Frieze in support of a regional museum in the UK: Middlesbrough Institute of Modern Art. Frieze London welcomed back several galleries for 2016 as well as new additions.

Frieze is the world’s leading platform for modern and contemporary art for scholars, connoisseurs, collectors and the general public alike. Frieze comprises four magazines—frieze, frieze d/e, Frieze Masters Magazine and Frieze Week— and three international art fairs—Frieze London, Frieze Masters and Frieze New York. Additionally, Frieze organizes a programme of special courses and lectures in London through Frieze Academy. Frieze was founded in 1991 by Matthew Slotover and Amanda Sharp, with the launch of frieze magazine, the leading international magazine of contemporary art and culture. In 2003, Sharp and Slotover launched Frieze London art fair, which takes place each October in The Regent’s Park, London. In 2012, they launched Frieze New York, which occurs each May in Randall’s Island Park, and Frieze Masters, which coincides with Frieze London in October and is dedicated to art from ancient to modern. Frieze fairs are sponsored by Deutsche Bank.
______________________

Participants across the main fair were commended for outstanding presentations with much enthusiasm for the fair’s bespoke design, and the quality of work presented. Strong business was conducted with sales reported to institutions and collections daily. The Nineties, a new section curated by Nicolas Trembley, was an immediate success, with 14 galleries selected to restage seminal shows of the decade. Leading international curators and participating galleries praised the section’s energy and innovation, which celebrated longstanding artist relationships and underscored the critical role of galleries in recent decades. Hans Ulrich Obrist, Artistic Director of The Serpentine said ‘Nicolas Trembley’s wonderful Nineties section was a great highlight - a portrait of a decade through the remaking of exhibition history. As Eric Hobsbawm said, ‘a protest against forgetting.’

Young galleries this year offered a range of ambitious presentations across the Focus section, which attracted significant institutional attention and resulted in acquisitions from international institutions and private foundations. Curators for this year, Fabian Schöneich (Portikus, Frankfurt) and Jacob Proctor (Neubauer Collegium for Culture and Society, University of Chicago), ensured that the section remained the definitive destination to discover emerging talent; whilst Live continued to develop into a section recognised and admired as an important platform for international performance art.

The Frieze Art Fair Stand Prize recognises an outstanding gallery presentation at Frieze London. This year’s jurors included Martin Clark, Director, Bergen Kunsthall; Dr. Omar Kholeif, Manilow Senior Curator at the Museum of Contemporary Art Chicago; and Helen Molesworth, Chief Curator, Museum of Contemporary Art, Los Angeles. The prize of was awarded to kurimanzutto, Mexico City for their outstanding presentation of works by Leonor Antunes, Roman Ondak, and Gabriel Orozco. Kurimanzutto said: ‘We are delighted and honoured to have received the prize for the best stand - Monica and Jose have decided to donate the prize money to a charity in Mexico, dealing with refugees. A lot of people who’ve come to the booth have spoken positively about the fair this year - it feels super vibrant with The Nineties and Focus sections. And the Frieze team have been great at introducing us to new collectors that we didn’t know, people from Latin America but also Europeans who are discovering galleries from elsewhere. We’re very pleased with sales this year - we’ve sold Leonor Antunes to a private foundation.’ The jury for the inaugural Focus Stand Prize included Gary Carrion-Murayari, Kraus Family Curator, New Museum; Yung Ma, Curator, Service Création Contemporaine et Prospective, Centre Pompidou; and Judith Welter, Director, Kunsthaus Glarus. It was awarded to Proyectos Ultravioleta, (Guatemala City). Stefan Benchoam, co-founder said: ‘The fair this year has been really incredible for us - the perfect first experience - and we couldn’t have expected more. We were pleasantly surprised to receive the stand prize - the jury who give prizes here are such recognised curators so it’s great to have the validation from them. We’ve had great sales and are really happy.’

This year saw the realization of two acquisition funds for national museums at Frieze London; the return of the Frieze Tate Fund, this year supported by WME | IMG, and the launch of the Contemporary Art Society’s Collections Fund at Frieze, supporting a regional museum in the UK. These initiatives resulted in the acquisition of major works. The Contemporary Art Society purchased moving image works by John Akomfrah (Lisson Gallery) and Kader Attia (Lehmann Maupin) for Middlesbrough Institute of Modern Art, which both address themes of colonisation and migration.