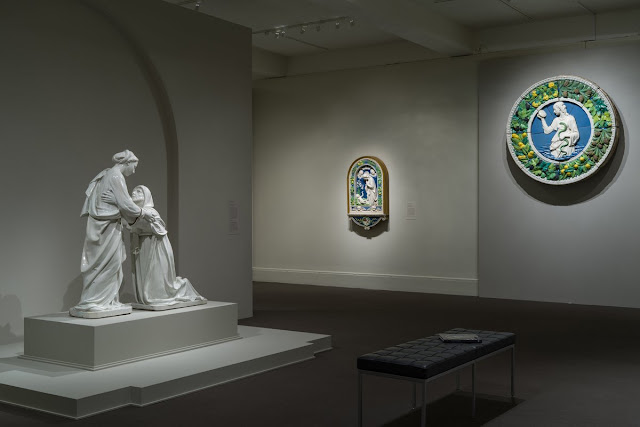 Friday, August 12, 2016 - If you find yourself in Boston this tie of the year and you are gallery-goer, or at least take some interest in arts, you will have your schedule full. Among other things take care not to miss the Della Robbia exhibition in the Museum of Fine Arts; its a magnificent show!

“Della Robbia: Sculpting with Color in Renaissance Florence” presents these works as powerful, expressive examples of the best of Italian Renaissance art. The exhibition features about 50 objects, mostly from American collections but including six important loans from Italy, never seen in the US before. The Visitation (about 1445) from the church of San Giovanni Fuorcivitas in Pistoia and the Brooklyn Museum’s newly restored Resurrection of Christ (about 1520–24) travel to Boston along with a trio of nearly life-size works from the Los Angeles County Museum of Art, the Uffizi Gallery in Florence and a private collection. The exhibition of glazed terracotta Renaissance works by the Della Robbia and rival workshops spans a variety of formats—Madonna and Child reliefs, small- and large-scale figures, narrative reliefs, coats-of-arms, and still-life compositions—that demonstrate the range and visual impact of the groundbreaking Della Robbia glazing technique.

In the 15th century, Luca della Robbia (1399/1400–1482) invented a glazing technique for sculpture characterized by brilliant opaque whites and deep cerulean blues. Luca shared the secrets of his technique with his nephew and principal collaborator Andrea della Robbia, who in turn passed them on to his sons Giovanni, Luca the Younger, Marco, Francesco, and Girolamo. The Della Robbia family workshop flourished in Florence for about a century, producing expressive artworks for all spheres of life. Portraying both sacred and secular themes, it gained a strong presence in public spaces—from street corners to churches—and private homes. Production of sculpture using this technique lasted only about a century before its secrets were lost. Some of the most familiar images today of Renaissance Italy, Della Robbia sculptures have retained their original color and shine over the centuries.