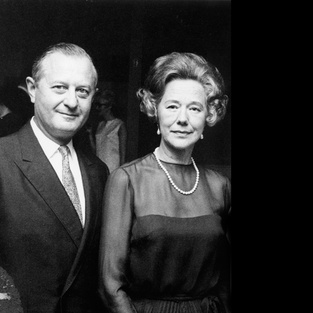 Saturday, August 27th, 2016 - While Christie's and Sotheby’s  put it in NewYork, Stockholms Auktionsverk is announcing the IngaBritt & Arne Lundberg Collection sale. Best known for their work through the IngaBritt & Arne Lundberg research foundation, with almost a billion kronor in equity, this foundation is devoted to promoting medical science research, primarily in the fields of cancer, kidney disease and orthopaedics. Few people know that the Lundbergs shared a great passion for and interest in art. After a good deal of research, Stockholms Auktionsverk has determined that the Lundbergs were autodidacts in the area of art collection. The conclusion is thus that working purely on feeling, they made a series of inspired purchases from galleries and art dealers during their regular journeys through Europe. Their art collection, which features works of the finest international calibre, is thus the result of many years of careful selection. The collection features 20 significant works by artists including Wassily Kandinsky, Yves Klein, Max Ernst, René Magritte, Victor Vasarely, Raoul Dufy, František Kupka and Jean Fautrier. 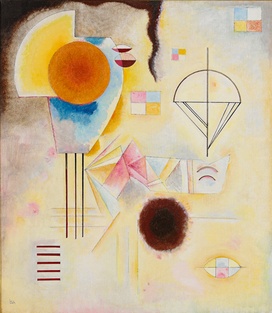 The absolute highlight, however, is without doubt Kreis u. Fleck by Wassily Kandinsky, one of the greatest, most trailblazing artists of the 1900s. The work stems from 1929 during the artist’s significant period as a leading member of the Bauhaus School in Weimar and Dessau (1922–1933). Kandinsky, who is considered to be one of the finest proponents of the abstract movement, developed the abstract approach in works including the book of art theory entitled Über das Geistige in der Kunst (Concerning the spiritual aspect of art), in which he combines various facets of spiritualism with strict formalism. The sale of this painting is nothing short of a sensation in the world of Swedish auctions. The painting was previously owned by the influential Sidney Janis Gallery in New York, and it has been exhibited in a range of museums and galleries around the world, including the San Francisco Museum of Modern Art, Kunsthalle in Bern, the Palais des Beaux-Arts in Brussels, the Galerie Beyler and Galerie Möller in Basel, and Marlborough Fine Art in London. This sale is going to take place in Stockholms Auktionsverk 15 November at 7:00 pm.

> Henry Hudson Sun City Tanning - Sotheby’s S|2 New York 14th September - 14th October 2016
For his inaugural New York exhibition, Henry Hudson will create an entirely new body of work. The artist has gained recognition for his figurative paintings made from Plasticine, works charged with social commentary, steeped in references of city life and excess. For this show Hudson will produce eight large scale nature paintings which, while figurative, offer an abstract investigation into the artist’s philosophy of transgression and transcendence. Here, Hudson will be taking on the great and awe-inspiring subject of botany, observing the constant struggle for survival in the life of plants as well as hinting at Shamanic rituals of spiritual healing. These luxuriant jungle scenes allow the artist to really expand the medium of Plasticine in creating very sculptural landscapes, rich in details, colour and texture. From his studio in East London, Hudson will assemble large imagined tropical environments drawn from a wide range of sources, including photographs taken at during visits to Kew Gardens, internet images and historical books of botanical illustration. He will draw similarities to the practice of French Post-Impressionist Henri Rousseau 2 and the American painter Martin Johnson Heade. Although these new works offer a departure from the human figure, Hudson here continues his playful use of storytelling within his practice, using the jungle as an allegory of the human condition. The subjects are fantasy - even psychedelic - landscapes, brought to life by varying light sources, temperamental weather patterns and the scramble for survival. References to Shamanic rituals further explore issues of lawlessness, morality, fulfilment and enlightenment. With this body of work, Henry Hudson willingly blurs the boundaries between reality and fiction. The artist negotiates topics of anxiety, trauma and repair by approaching them from the point of view of social scientist, exorcist and healer. For the first time in his career, Hudson allows the artist to become the protagonist, utilising fantasy jungle as the backdrop: inviting comparisons to Joseph Beuys who, likewise, turned injury into fable and used a variety of mediums to propose magical strategies of healing. Shown alongside the paintings will be a collection of eight hand coiled ceramic pots, made in collaboration with the artist’s brother Richard WM Hudson (b 1980). These tricolor painted vessels, organ-like in appearance, will be comparable to carnivorous plants. The vessels also refer to sacred vessels employed in Shamanism, ayahuasca ritual and ceremony. Hudson’s playful narratives, imagined or otherwise, will reveal a true exploration into the artist’s medium and his craft. For the first time Hudson will experiment with mixing his own colour pigments. With nature as his subject, he will traverse techniques hitherto unexplored in his practice. This series acts to transport the viewer into other realms. While offering an often humorous metaphysical enquiry into human behaviour and endeavour, this is work which also expands the common thread running through the oeuvre of this exciting artist. Here are themes of human enquiry, transgression and the confrontation. 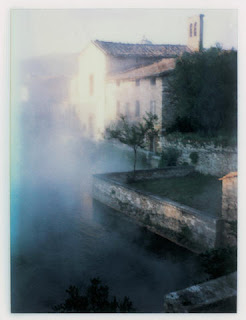 >  Andrey Tarkovsky (Russian, 1932-1986) A group of 10 Polaroid photographs 9.2 x 6.9cm on sale titled "Tarkovsky's Mirror on  the world"
The definitive collection of Polaroids taken by the legendary filmmaker Andrey Tarkovsky (1932-1986) will come to auction for the first time in a stand-alone sale, Nostalgia: Before and After – Important Polaroids by Andrey Tarkovsky, at Bonhams London on 6 October 2016. The photographs – 257 Polaroids in total, are divided into 29 lots containing nine or ten pictures each, with estimates ranging from £20,000-37,000 per lot. They date from Tarkovsky's time in Italy and Russia and come directly from his family. The collection will be previewed at Bonhams 580 Madison Avenue New York, 8-22 August and at Bonhams 101 New Bond Street, 2-6 October. Many of the photographs were taken while Tarkovsky was making Nostalgia, and the photos feature the familiar atmospheric landscapes and settings of that legendary 1983 film. From intimate snapshots of Tarkovsky's circle of friends and dog, to evocative pictures of the Russian and Italian countryside, the works give a glimpse of late 70s and early 80s life, frozen in time. Tarkovsky started experimenting with the Polaroid camera in the late seventies, and was delighted with the results, although he immediately burned the Polaroids he was not happy with.