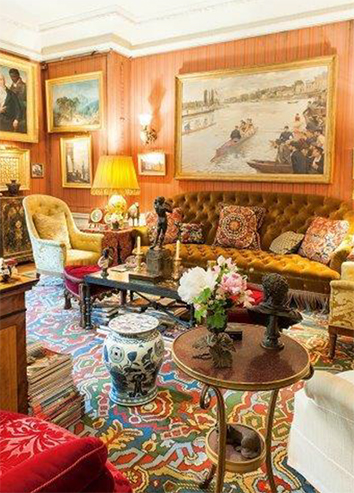 Monday, July 18th, 2016 - On the upcoming Thursday 13 and Friday 14 October 2016, Pierre Bergé & associés in association with Christie’s, will offer the collection of Pierre-Yves Le Diberder at Drouot, in salerooms n°5 and n°6. From antiquities to Asian arts, from old master drawings and paintings to post-war and contemporary art and from decorative arts to design, the sale will comprise approximately 300 lots, estimated €1.5M euros in total.

In 1973-74, when Pierre-Yves Le Diberder moved in his apartment located on the prestigious avenue Foch in Paris, he found himself sharing his great passion for art with Jean-Paul Faye, a well-known decorator. Faye was a perfectionist, very fond of precious materials and luxuriant colors; he also cherished the virtues of accumulation and eclecticism. Apart from cultivated conversation and passionate knowledge in collecting, the skills required from a great decorator at the time encompassed the ability to create lasting interiors, as opposed to theatre sets that inspired nice photographs but went out of fashion three years later. The science of volumes and of noble materials was as important as the perfect knowledge of trimmings. Faye and Le Diberder worked together for over ten years, and called each other every day to share their latest findings on the left bank or at the flea market. Weekends were dedicated to striding along galleries on Saturdays, at the Clignancourt flea market on Sundays, and to keenly flip through auction catalogues.

The result was a collection of 19th century taste, where the Restauration and Louis-Philippe styles prevailed, with mahogany, exotic watercolors and Neo-Gothic pieces. Gradually, the collection devoted more room to the LouisPhilippe and Second Empire styles with their comfortable paddings and rich fabrics. The mahogany chairs, a bit austere from the early stages of the collection, made room to comfortable Napoleon III sofas, intended to contemporaries of the Castiglione and the Traviata. Highlights of the collection include a Roman marble torso of Bacchus Ephebe, estimated between 15,000 and 20,000 euros. From 600 years later, five landscapes of antique ruins drawn by Louis François Cassas are estimated from €15,000-20,000 up to €40,000-60,000, and an impressive portrait of a Horserider and his dogs by Alfred de Dreux (€80,000-120,000) counts among the most important old master paintings of the collection. The sale also features works by some of the greatest names of the 18th and 19th centuries’ decoration, as illustrated by a Louis XVI meuble-à-hauteur-d’appui by Jean-François Leleu (€15,000- 20,000) and another one stamped by Jean-Henri Riesener (€20,000-30,000), a Consulat armchair stamped by Jacob Frères Rue Meslée (€10,000-15,000) and a late Empire chandelier attributed to Thomire (€30,000-50,000). As part of the decorative artworks, a 17th or 18th century Italian pair of scagliole plaques depicting parrots is estimated between €20,000 and €30,000.