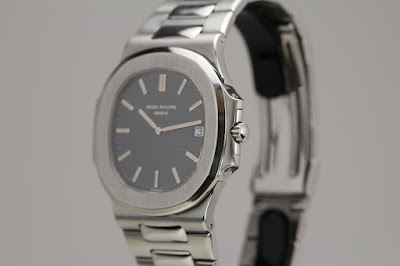 Saturday, July 16th, 2016 - After Christie’s thematic auction curated around the 175th anniversary of Patek Philippe in November 2014, the auction house will be holding this Fall an anniversary sale to commemorate the 40th anniversary of the Patek Philippe Nautilus model. Christie’s international watch department will be holding sales in the four major auction venues – Dubai – Geneva – Hong Kong – New York from October to December and in each venue 10 exceptional Nautilus models will be presented as a section entitled Patek Philippe Nautilus 40. The 40 watches will cover the Nautilus production from the first model to the most recent, including many rare and fresh to market superlative examples of this beloved watch design. The Nautilus Model was launched in 1976, when Patek Philippe was looking for a ‘sports’ watch combining a strong design and an inimitable personality. The design was, and still is based upon the shape of a porthole found on virtually all maritime vessels. The original model was the Ref. 3700/1 made in steel, created 137 years after the founding of Patek Philippe and remains one of the most sought-after timepieces at auction. Christie’s offering of the Patek Philippe Nautilus 40 will present a selection of these exceptional collector items, including examples with rare variant dials and near mind and complete examples. Today, the Nautilus is still in production and throughout time it has gained style through subtle and carefully calculated changes while preserving its original spirit of a classic, elegant sports watch. At the time of its original launch, the Nautilus had a key role in Patek Philippe's overall marketing strategy in response to the quartz revolution and the evolving fine watch market of the 1970s Christie’s holds the record price for any Nautilus model sold at auction, when ref. 3700/031, made in 1982 sold for CHF845,000 / $909,319, against a pre-sale estimate of CHF200,000-400,000/ $220,000-420,000 on 11 May 2015 in Geneva. Patek Philippe, the last family owned independent watch maker in Geneva, was founded in 1839. For over 175 years, it has perpetuated the tradition of Genevan watchmaking, producing and assembling what experts agree to be among the most sought after watches in the world.