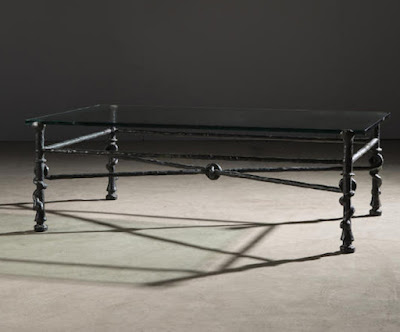 Tuesday, June 7th, 2016 - An exceptional 35-lot collection of furniture and lighting masterpieces will be presented at the Design auction on June 21 at Bonhams New York. The lots originate from Chandigarh, a city in north India, and represent a landmark in urban planning and architectural history for India. Chandigarh is the capital of not one, but two states — Punjab and Haryana — in north India, and the city was conceived and designed by Swiss-French modernist architect Le Corbusier with the help of his close collaborator, cousin Pierre Jeanneret. They planned for it to be a utopian city of the future, from its residential and municipal architecture, murals and furniture, to lighting. The then Indian Prime Minister, Jawaharlal Nehru said it should "be a new town, symbolic of the freedom of India, unfettered by the traditions of the past", while visiting the city project in 1952, five years after India's independence. This project presented Le Corbusier with the perfect opportunity to put his vision, including important architectural theories, urban planning and interior design philosophy into practice – all while Jeanneret oversaw the project for more than 15 years, as well as designed the majority of the furniture and lighting. Highlights from this collection include a Pierre Jeanneret teak and hide upholstered lounge suite (estimate U.S. $35,000-45,000); a Le Corbusier diablo floor lamp (estimate U.S. $25,000-30,000), and an important sculptural sissoo and teak library table by Pierre Jeanneret (estimate U.S. $30,000-50,000). These items were an integral part of the city, especially the public institutions and municipal buildings in Chandigarh. The Design sale, with a total of 67 lots, is also comprised of masterworks from key design movements of the 20th century — from arts and crafts, art nouveau, art deco and studio craft, to modern design.