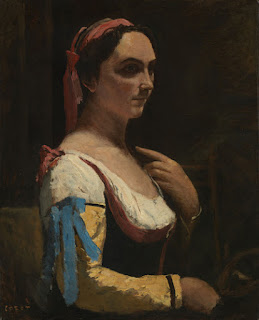 Saturday, May 21st, 2016 - This summer, the National Gallery in London, explores great paintings from a unique perspective: from the point of view of the artists who owned them. Spanning over five hundred years of art history, Painters’ Paintings presents more than eighty works, which were once in the possession of great painters: pictures that artists were given or chose to acquire, works they lived with and were inspired by. This is an exceptional opportunity to glimpse inside the private world of these painters and to understand the motivations of artists as collectors of paintings. The inspiration for this exhibition is a painter’s painting: Corot’s Italian Woman, left to the nation by Lucian Freud following his death in 2011. Freud had bought the 'Italian Woman' 10 years earlier, no doubt drawn to its solid brushwork and intense physical presence. A major work in its own right, the painting demands to be considered in the light of Freud’s achievements, as a painter who tackled the representation of the human figure with vigour comparable to Corot’s. The National Gallery holds a number of important paintings which, like the Corot, once belonged to celebrated painters: Van Dyck’s Titian; Reynolds’s Rembrandt, and Matisse’s Degas among many others. 'Painters’ Paintings' is organised as a series of case studies each devoted to a particular painter-collector: Freud, Matisse, Degas, Leighton, Watts, Lawrence, Reynolds, and Van Dyck. 'Painters’ Paintings' explores the motivations of these artists – as patrons, rivals, speculators - to collect paintings. The exhibition looks at the significance of these works of art for the painters who owned them - as tokens of friendship, status symbols, models to emulate, cherished possessions, financial investments or sources of inspiration. Works from these artists’ collections are juxtaposed with a number of their own paintings, highlighting the connections between their own creative production and the art they lived with. These pairings and confrontations shed new light on both the paintings and the creative process of the painters who owned them, creating a dynamic and original dialogue between possession and painterly creation. Half the works in the exhibition are loans from public and private collections, from New York and Philadelphia to Copenhagen and Paris. A number of them have not been seen in public for several decades.