Thursday, May 19, 2016 - Bonhams and Turner Classic Movies (TCM) present Drawn to Film, an auction of animation art from classic Disney films, including Sleeping Beauty, Cinderella, Alice in Wonderland, Peter Pan, Pinocchio, Dumbo and others. Consisting of nearly 400 lots, the core of the sale is the Ted and Dawn Hopkins Collection of animation art, a comprehensive look at the history of animation lovingly amassed over decades. Drawn to Film will take place on June 13 at Bonhams New York.

The making of Snow White and the Dwarfs 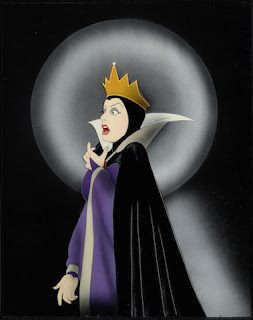 The sale traces the development of Snow White and the Seven Dwarfs (1937), which was Walt Disney's first animated feature film. Animators worked to provide each dwarf with distinctive faces, personalities, behavior and clothes after they were named. A group of eight concept drawings of the dwarfs and Snow White (estimate U.S. $3,500-4,500) were created specifically for Walt Disney in 1935. This group shows sketches of discarded dwarfs, Deafy and Baldy, from the list of potential names that also included Jumpy, Wheezy, Tubby and Sniffy. Celluloids of Snow White and the Witch (estimate U.S. $5,500-6,500), and the Evil Queen (U.S. $12,000-15,000) are also on the auction block.

Early on, Walt Disney decided that it was easier to hire young animators and train them than to poach talent from other studios. In the early 1930s, the Walt Disney Studios created an internal training and internship program for new animators to foster the studio distinctive style. As the script for Snow White neared completion, Walt insisted that the entire art department, not just the new hires, attend weekly mandatory classes. A collection of 13 mimeographed manuscripts from these lectures on animation theory and practice is featured in the sale (estimate U.S. $1,000-1,500), a portion of which comes from the collection of early Disney animator Harry Reeves.

Another platform used as training for Disney and his animators was the Silly Symphony films, which were shorts that featured little to no narrative (unlike the Mickey Mouse series) and instead provided intriguing animations to accompany classical music. A collection of 71 animation drawings from 34 titles in the Silly Symphony series, 1929-1939, is one of the highlights. It is estimated at U.S. $20,000-25,000.

Important Disney animated classics
The auction also features works that mark important signifiers in the life of Walt Disney and the history of the company. Sleeping Beauty (1959) was the last of the classic fairytales created by Disney himself, and at a production cost of $6 million, it was the most expensive animated feature film ever made up until that time. Two concept paintings by Eyv ind Earle, richly colored and stylized renderings of the dragon and the fairies, were created while the studio was finalizing the look and feel of the film and would have been submitted to Disney himself for approval (estimate U.S. $8,000-12,000 and $10,000-15,000).

A watercolor concept painting of Mowgli and an elephant tree from The Jungle Book is also going under the hammer. The film was the last one that Walt Disney worked on before his death in 1966 and was based on a popular book by Rudyard Kipling. The story inspired another Disney-produced blockbuster hit released earlier this year, directed by Jon Favreau.