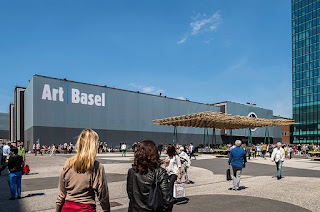 Art Basel will present a premier program of film and video work, selected for the second year by the Cairo-based film curator and lecturer Maxa Zoller. Drawn from the show’s participating galleries, highlights of this year’s program include an exclusive preview of Pierre Bismuth’s film ‘Where is Rocky ll?’ and ‘History’s Future’, the first feature-length fiction film by Fiona Tan. The Film program will also feature 'Reminiscences of a Journey to Lithuania' by Jonas Mekas, one of the pioneers of post-war experimental filmmaking, and ‘Burden’, a documentary by Timothy Marrinan and Richard Dewey about Chris Burden’s life and work, selected by Marian Masone. Following last year’s collaboration with Art Basel, the Festival del film Locarno will present the Swiss premiere of ‘Continuity’, the most recent feature-length film by Omer Fast. The Film program will also include works by Basel Abbas and Ruanne Abou-Rahme, Yuri Ancarani, Manon de Boer, Tim Davis, Edith Dekyndt, Simon Fujiwara, Beatrice Gibson, Sven Johne, Park Chan-kyong, Martha Rosler, Anri Sala, Cally Spooner and Superflex.

Monday, June 13
10pm | Introduction by Pierre Bismuth of 'Where is Rocky II?'
10.30pm | Screening | Pierre Bismuth: 'Where is Rocky II?' (2016)
Running time 93'; team (gallery, inc.), Jan Mot, Christine König
This year’s Film program opens with an exclusive preview of ‘Where is Rocky II?’, the first
feature-length fiction film by French artist Pierre Bismuth. The story’s starting point is the
search for a mysterious object: an artificial rock that artist Ed Ruscha hid in the vast
California desert in the 1970s. ‘Where is Rocky II?’ is at once a documentary, a crime thriller
and a work of art – and ultimately something else entirely. Pierre Bismuth leads the audience
on a wild goose chase through reality and fiction, until it is impossible to tell them apart.

Wednesday, June 15
8.30pm | Screening | Fiona Tan: ‘History's Future’ (2016)
Running time 95', Frith Street Gallery, Mongrel Media
‘History’s Future’ is the first feature-length fiction film by Netherlands-based Indonesian
artist Fiona Tan. The film’s protagonist, ‘MP’ (Missing Person), is a middle-aged man who
has been beaten so badly that he loses his memory and must piece his life together
anew. Through poetic images of European cities and impressive actors, Fiona Tan tells a
moving story and puts her finger on the sore spots of our time: violence, amnesia, shock,
loss of identity; being everything and everywhere at once, and yet nothing and nowhere.
The screening will be followed by a Q&A with Fiona Tan and Maxa Zoller.

Thursday, June 16
8pm | Jonas Mekas: ‘Reminiscences of a Journey to Lithuania’ (1971/1972)
Running time 82'; James Fuentes
Jonas Mekas is one of the pioneers of post-war experimental filmmaking, co-founder of
New York’s Anthology Film Archives and, at 93 years of age, still a tireless filmmaker in
his own right. This film reflects his tumultuous biography; he fled from Lithuania at age
22, was captured by the Nazis, after the war attended the University of Mainz and in the
late 1940s emigrated to New York. In ‘Reminiscences of a Journey to Lithuania’ he
documents his first trip back to his native land.
The screening will be followed by a Q&A with Jonas Mekas and Maxa Zoller.
10.30pm | Short Film program | 'Migrating Birds'
Running time 38'; curated by Maxa Zoller
This program tackles one of today’s most pressing issues: mass migration. However,
instead of focusing on tragedy, these films use indirect, metaphoric language to raise the
question of what it means to risk ‘crossing the water’.
Martha Rosler, Because This Is Britain..., 2012, 3', Galerie Nagel Draxler
Sven Johne, A Sense of Warmth, 2015, 15'35, Galerie Nagel Draxler
Edith Dekyndt, Material M, 2007, 1'35'', Galerie Greta Meert
Superflex, KWASSA KWASSA', 2015, 18'15'', Nils Staerk
Basel Abbas and Ruanne Abou-Rahme, The lncidental lnsurgents, Part 2: Unforgiving
Years, 2014, 6'30'', Carroll / Fletcher
The screening will be followed by a Q&A with Basel Abbas and Ruanne Abou-Rahme,
Bjørnstjerne Christiansen and Maxa Zoller.

Friday, June 17
8.30pm | Special screening | Omer Fast: 'Continuity' (2016)
Running time 85'; selected by Sergio Fant, programmer Festival del film Locarno, gb
agency, Arratia Beer, Dvir Gallery, James Cohan Gallery, Filmgalerie 451
Following last year’s collaboration with Art Basel, this year the Festival del film Locarno
presents the Swiss premiere of ‘Continuity’, the most recent feature-length film by Omer
Fast. A short version of the film premiered at documenta 13 and has since won several
awards. The long version is a remake, repetition and continuation of the short version.
‘Continuity’ begins as a straightforward story of an emotional homecoming and turns
uncanny as the two protagonists – a middle-aged couple living in a small town in
Germany – repeatedly invite different young men into their home to perform a mysterious
ritual.
The screening will be followed by a Q&A with Omer Fast and Sergio Fant, programmer
Festival del film Locarno.

Saturday, June 18
8pm | Special Screening | Timothy Marrinan, Richard Dewey: 'Burden' (2016)
Running time 90'; selected by Marian Masone
European premiere
From his controversial performances of the early 1970s to his most recent sculptures and
installations, Chris Burden's work has consistently raised questions about the limits and
nature of art. Using unprecedented access to Burden's archive as well as candid footage
of the artist in the final years of his life, this documentary is a revealing portrait of the man
behind some of the most thought provoking and influential artworks of the past 50 years.
The screening will be followed by a Q&A with Timothy Marrinan, Richard Dewey and
Marian Masone.

Address
Stadtkino Basel
Klostergasse 5 4051 Basel
Tram number 1 (direction SBB) or 2 (direction Binningen) from Messeplatz to Bankverein.
From Bankverein it is a 3-minute walk to the Stadtkino.