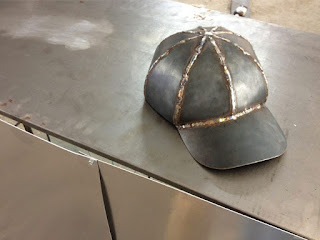 Thursday, April 14, 2016 - Elika gallery presents "Somebody had to do it", a solo exhibition by Vasilis Papageorgiou. The show opens on Friday the 22nd of April and runs until the 4th of June.

For his first solo show, and in an effort to create a platfrom in which to draw together recent works, Papageorgiou creates a large scale installation inspired by the bar as a meeting point. Tha bar and the space that unfolds around it become an assembly point for commonplace, everyday objects that bear no relation to each other - other than forming part of the artists’ personal universe - objects that are drastically redefined in the Athenian landscape that is put together.  Using the materials as well as their characteristics and properties as the starting point for his work, the artist constructs a still life composed of contemporary archaeological findings that is infused with sarcasm and humour. The focus here is on relationships; between objects, between objects and people, and ultumately, the broad spectrum of human relationships. Papageorgiou’s bar functions, not only as a physical boundary, but also as a symbolic boundary between imagination and reality. The staged landscapes and micro-situations and scenarios lead the viewer onto an exploration of the space of dreams and the subconscious. In "Somebody had to do it" the function of objects is negated and time stops in a static narrative that has no beginning, middle or end.

Vasilis Papageorgiou was born in Athens, Greece in 1991. He graduated from the Athens School of Fine Arts in 2014 and he is currently enrolled in the postgraduate programme of St Lucas, Brussels. He is a member of the GPO collective and co-founder of Enterprise Projects, Athens. Papageorgiou has participated in numerous projects in Greece and abroad, including The London Intensive residency in 2015 organised by the Slade and Camden Arts Centre, London.