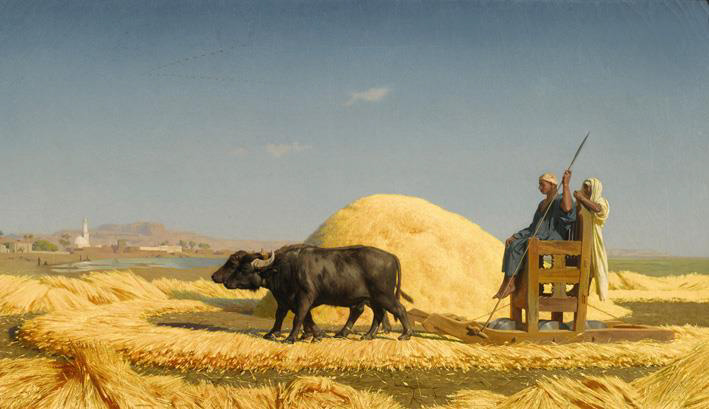 Saturday, April 2, 2016 - This Spring Sotheby’s is presenting "Orientalist & Middle Eastern Week" in London, dedicated to over 1000 years of artworks and objects celebrating the culture of the Middle East and the wider Islamic world. Comprising five sales in total and running from 15-21 April 2016, the series of auctions includes Sotheby’s annual Orientalist Sale, Arts of the Islamic World, the relaunched 20th Century Art / Middle East sale, Alchemy: Objects of Desire, a single-owner sale featuring Iranian and international contemporary art, and The Library of Mohamed and Margaret Makiya. Held annually in London since 2012, The Orientalist Sale on 19 April showcases 40 lots representing the finest and most sought-after examples in this field. Exhibited alongside the Arts of the Islamic World, together the two sales offer an opportunity to unite Orientalist paintings with rare and precious works of art from countries under Islamic patronage. Orientalism was essentially a 19th -century phenomenon. While many other movements in 19th -century European art were relatively short-lived, Orientalism's durability lay in its versatility. Travelling from America and Europe to the lands known collectively in the 18th and 19th centuries as the Orient, artists aimed to capture sites, cultures and the bright desert light that few had experienced before. Orientalist art sheds light on the history of these lands – encompassing Morocco in the west through Egypt, Istanbul and the Levant to as far east as Persia and India – from a time when photography was in its infancy and figurative art was not traditionally practised. 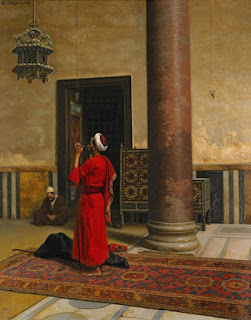 Ludwig Deutsch, an Austrian artist working in Paris who first travelled to Cairo in the early 1880s, is revered for his breathtakingly observed scenes notable for their meticulous details. This year’s sale will be led by Deutsch’s Morning Prayers, a luminous masterpiece of 1902 (illustrated on page 1). Estimated at £500,000- 800,000, the work demonstrates the artist’s respect for Muslim worship. A powerful and noble evocation of the rites and religion of the Muslim world, Morning Prayers depicts two men absorbed in prayerful contemplation, facing towards the mosque’s mihrab indicating the direction of the Kaaba in Mecca. The identity of the mosque which forms the setting of the work is not known. The lack of architectural detail and the simplicity of the backdrop serve to focus attention on the prayer sequence which so captivated Deutsch and other Orientalist painters used to Christian worship. The minute detail and photographic realism of the painting, from the mother-of-pearl inlaid kursi cabinets and Syrian pendant lamp to the Persian Sauj Bulagh rug – a myriad of textures and surfaces, hard and soft – betrays Deutsch’s rigorous academic training in Paris. 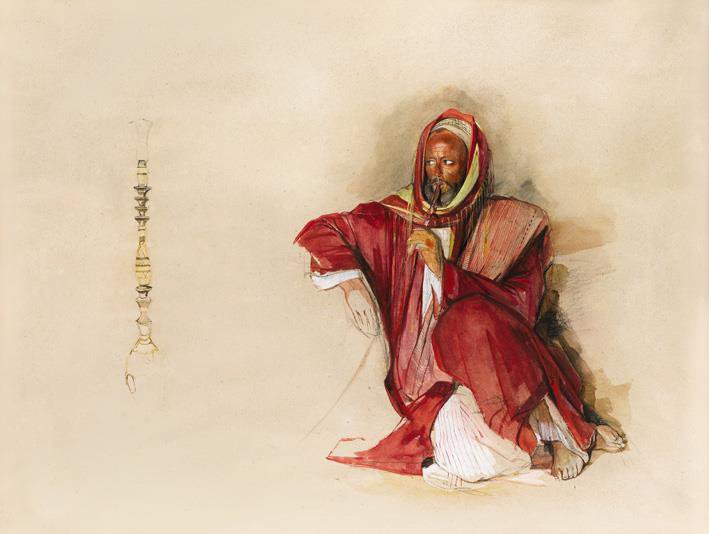 Among the other key offerings in the sale is a group of works by British artist traveller John Frederick Lewis. Outdoor Gossip, a jewel-like oil of 1873, of two gentlemen of Cairo exchanging news (and the pendant to Indoor Gossip) is estimated at £300,000-500,000; four exquisitely fresh drawings will also be presented, three figural, one of a mosque interior, which have descended in the artist’s family. Outdoor Gossip was exhibited with its companion painting at the Royal Academy in 1874. This seems to have been the first time Lewis shows male and female gendered spaces as a deliberately contrasted pair. While his women are pampered, sequestered, enclosed, his men are relaxed, unrestricted and involved in debate, reflecting the perceived conventions of Eastern society. Indoor Gossip contains an enigmatic twist characteristic of the artist: nearly two-thirds of the painting is occupied by an interior space in shadow, and although the outside world is glimpsed, the figure standing at the threshold faces inward. Lewis spent ten years living in Cairo, dressing as an Egyptian and assimilating into Egyptian society. During this time he visited Sinai, passing through Suez en route. Seated Arab Merchant at Suez, estimated at £40,000-60,000, is an informal portrait in which the sitter is neither romanticised nor patronised, but portrayed as Lewis found him (illustrated right). Lewis brings an equally intense scrutiny of facial features and garments to Albanian Guards in Bursa, Turkey, estimated at £50,000-70,000. The artist has deliberately left out the surroundings, so as to focus more intently on the guards’ magnificent apparel and impressive array of weaponry. 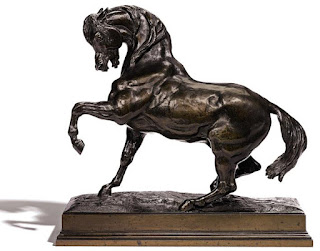 Sculpture is represented in the sale with a particularly fine and rare lifetime cast of Cheval turc No. 2 by Antoine-Louis Barye, described by the celebrated French critic Théophile Gautier as ‘Le Michel-Ange de la Ménagerie’. Considered the inventor and undisputed master of animalier sculpture, Barye created an exceptional oeuvre in which animal subjects were used by the sculptor to represent extremes of power and emotion. The Cheval turc is regarded as the model which most forcefully epitomises Barye’s unique vision. Estimated at £50,000-70,000, Cheval turc No. 2 is not only steeped in the Romantic spirit of Barye’s own age but also recalls the Antique equestrian group of Marcus Aurelius, and the Renaissance precedent of Leonardo da Vinci’s drawings of a rearing horse. During his career, Barye produced thousands of drawings and expertly transposed his draughtsman’s sense of shape and profile into three dimensions. An extraordinary collection of 453 Vienna bronzes will be offered in a single lot, with an estimate of £300,000-400,000 (selection illustrated above). Many of the bronzes in the group were produced by the Franz Bergmann foundry, the most famous of the 50 or so Viennese foundries producing ‘Vienna bronzes’ at the turn of the 20th century. Each piece is by definition unique, for while they were cast in small editions of 10 to 30, each was individually ‘cold painted’, coloured by hand by the many anonymous artisans employed by Bergmann’s workshops. With subjects ranging from street merchants to camel riders, some of the pieces have been fashioned into lamps. 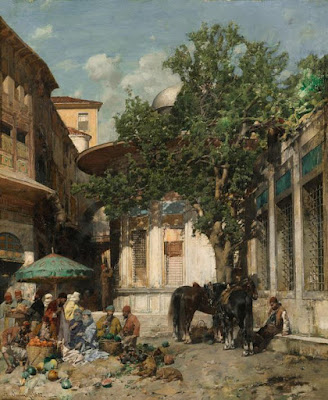 Estimated at £200,000-300,000, By the Fountain by Alberto Pasini is an exceptionaly fine example of the Italian artist’s carefully observed, naturalistic street views, and his reputation as both a fine draughtsman and meticulous colourist. Dominating the composition is a circular, domed rococo fountain typically found in public squares in Turkish towns and cities. Ottoman 'fountains' sometimes incorporated a counter, or sebil, from which refreshments would be served. Here, a man drinks from a tap or çeme, above a carved marble basin.

The searing desert heat and strong light is perfectly captured in The Wadi at Bou Saada by Eugène Giradet, estimated at £150,000-200,000. In 1874, Giradet embarked for Morocco, then travelled to Tunisia and Algeria, for which he developed a particular fondness. He spent subsequent visits in Algiers and Boghari, but above all in El Kantara and Bou-Saâda, in the foothills of the Saharan Atlas, painting everyday scenes.